The Evil of the Daleks 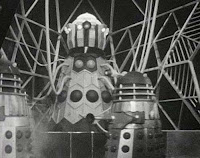 I won't pretend that I understand the various ins and outs of copyright law, especially not the copyright laws of other countries. I will say that I'm amazed that Terry Nation, the man who created the Daleks, was somehow able to hold the copyright to the Daleks despite having created them specifically for Doctor Who. Jack Kirby is probably still spinning in his grave over that one. Since Nation was trying to get a Dalek show off the ground in America, The Evil of the Daleks was intended to be the last time our beloved Doctor faced his most famous foes, and it was the last time... for about four years. At least it made for a pretty good serial, with several twists and turns and the introduction of a new companion, Victoria. And as an added bonus, there's definitely a hint of I, Borg in there too.

Rating: The Daleks will take pleasure in killing everyone in sight%

(Image from tardis.wikia.com)
Posted by Quammy at 5:30 PM No comments: 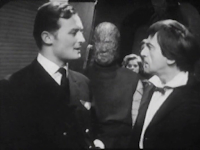 In the previous serial, we got our first glimpse of Doctor Who's new title sequence. Now, in The Faceless Ones, we get an updated theme song to accompany the new intro. Doctor Who is, after all, a show that is continually trying to update itself. Out with the old, in with the new. And so, in this serial, we say goodbye to Ben and Polly. As this particular adventure ends, we come to find out that the TARDIS has brought the Doctor and his companions to London on the exact day that Ben and Polly had initially left with the First Doctor. Leaving them free to pick up exactly where they had left off. It's an awfully lucky coincidence considering that all of the Doctor's previous companions were either left stranded, killed, or returned to their homes years after they first left. The Doctor doesn't exactly have a great track record when it comes to parting ways with his companions.

Rating: Some sort of official mumbo jumbo%
Posted by Quammy at 4:41 PM No comments: