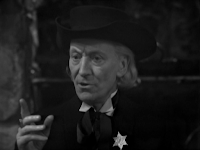 When I saw The Ark, I was impressed that the production staff of Doctor Who would bother putting together an episode that required multiple live animals in an indoor setting. Doctor Who was famously made on the cheap in some of the BBC's smaller television studios. So you can imagine the headaches that filming with live animals would have caused. I was similarly impressed by the use of live horses in The Gunfighters. They probably could have gotten away without using the horses but they're a nice touch here. And even though the serial is clearly being filmed in a studio, the sets used in the production are quite good. There's an odd musical cue that reoccurs throughout the four episodes that is pretty unnecessary. Also, this serial features one of my favorite things: British actors using bad American accents. I usually find it difficult to spot a Brit doing an American accent, but there are a few actors here who don't come anywhere near the mark.

Rating: People keep giving me guns and I do wish they wouldn't%
Posted by Quammy at 4:41 PM No comments: