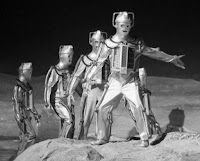 When the Daleks first showed up on Doctor Who, they were a cultural sensation. Without the Daleks, the show probably wouldn't have lasted this long. But the Doctor can't fight the Daleks every week. And, by this time, with a new Doctor in the TARDIS, the show's producers were desperate to find a few more iconic villains. Hence, the return of the Cybermen, only a few months after they first appeared in The Tenth Planet. Here, in The Moonbase, they've received some upgrades. Their costumes have changed, giving them more of a robotic quality. And their bizarre sing-song voices have been modified, courtesy of the Radiophonic Workshop. At times, it can be difficult to understand what they're saying, but typically their dialogue boils down to, "do what we say or we'll kill you." The Cybermen's design would change slightly with each additional appearance, a trend that has continued in the revived series. The Moonbase is also notable for containing one of the first truly iconic moments for the Second Doctor. During a tense moment, the Doctor tells his companions and the occupants of the titular base, "There are some corners of the universe which have bred the most terrible things. Things which act against everything we believe in. They must be fought." The First Doctor would have shouted such a statement to the rafters, though he probably never would have said it in the first place. The Second Doctor delivers these words with a deadly, quiet seriousness. The Second Doctor loves to goof around but when the shit hits the fan, he can be as serious as a heart attack.

Rating: There must have been a reason for that%

(Image from avclub.com)
Posted by Quammy at 5:16 PM No comments:

Email ThisBlogThis!Share to TwitterShare to FacebookShare to Pinterest
Labels: Doctor Who, Missing Episodes, Quammy, The Cybermen, The Moon, The Second Doctor, tv review

The Underwater Menace is a real hodgepodge. It's got mad priests, mad scientists, caves, mines, fish people, and a plot to blow up the world. This probably isn't anyone's favorite serial from the Second Doctor era, but it's the earliest one with any surviving episodes. This is our first real opportunity to see the Second Doctor in action. Luckily, the main villain, Professor Zaroff, makes for a memorable adversary. His plot to destroy the planet is ridiculously dumb, but he's super evil and has a fantastic Austrian accent. Also, the Doctor dresses up as a gypsy at one point.

Rating: Just one small question: Why do you want to blow up the world?%

(Image from basementrejects.com)
Posted by Quammy at 6:56 PM No comments: 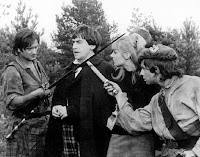 In the beginning, Doctor Who's producers tried to balance the tone of their show by contrasting the sci-fi serials with ones based around historical drama. The First Doctor certainly spent a lot of his time rubbing elbows with famous figures. But, by the Second Doctor era, the historical serial had fallen out of favor. The Highlanders would be the Doctor's last historical adventure that didn't contain sci-fi elements for a long time. While this serial is hardly one of the best of the historical serials, it's not without it's charms. The new Doctor continues to assert himself with a series of comical disguises and accents. William Hartnell's Doctor never had as much in the past as Troughton's Doctor does in this serial. We're also introduced to Jamie McCrimmon, who joins the Doctor, Ben and Polly as the newest companion. Jamie will go on to be one of the longest lasting companions in the show's entire run.

(Image from naturalscotlandfilms.org.uk)
Posted by Quammy at 2:17 PM No comments: