Doctor Who and the Silurians 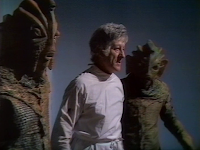 Doctor Who was always a particularly British show, but with the Third Doctor exiled to Earth the British-ness of it all has really ramped up. In Doctor Who and the Silurians, the Brigadier summons the Doctor and Liz to a nuclear power research centre in the countryside. They soon find out that the centre's power is being drained by the Silurians, an ancient race of bipedal reptiles who've only recently been awoken from their eons-long slumber. What makes this serial especially British is that the greatest threat to the Doctor's mission are the power struggles going on between the various parties around the research centre. There are several great toadying bureaucrats all vying for ultimate authority at the centre. There's even a power struggle among the Silurians, with some of the creatures hoping to negotiate a peace between themselves and the humans while others seek to decimate the population and reclaim the planet. And while all of that doesn't sound particularly fun, it's actually a good serial with fast pacing.

Rating: You may ask%
Posted by Quammy at 5:42 PM No comments: