The Massacre of St Bartholomew’s Eve 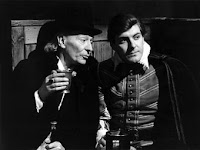 The Massacre of St Bartholomew’s Eve is a fairly straightforward historical serial. It starts out plainly enough with Steven and the Doctor arriving in France in the days before an epic wave of religious violence. After hitting up the nearest tavern, they decide to split up. The Doctor goes off to find an apothecary and then promptly disappears for the majority of the story. Steven ends up being the primary focus of this serial. He's oblivious to the events going on all around him even though he keeps bumping into and butting heads with all the key players. There's a nice fake out when William Hartnell (the actor who plays the First Doctor) comes in to the story playing another character, the Abbot of Amboise. At first it seems as though the Doctor has become a player in the central plot by disguising himself as one of the conspirators. But then the Abbot is killed and the Doctor shows up. It was just a big coincidence that the Doctor and the Abbot looked and sounded identical. After they're reunited, Steven pleads with the Doctor to help his new friends and intervene in the events unfolding around them but the Doctor refuses, saying that history cannot be changed. This leads to a big blow out between the two of them back on the TARDIS. Steven decides that he can no longer accompany the Doctor and gets off the TARDIS when they re-materialize. Being alone for the first time in a while, the Doctor has a good long mope about his former companions. And then, because the door was left open, in walks Dorothea "Dodo" Chaplet. The Doctor tries to shoo her away and then in runs Steven with the Police close behind. Quickly, the Doctor shuts the doors and fires up the TARDIS, making Dodo their newest travelling companion.

(Image from Wikipedia)
Posted by Quammy at 6:46 PM No comments: 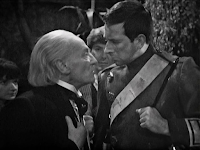 The Daleks' Master Plan is a good serial. It's so good that I'm just going to breeze past all of the white actors playing various Asian and Egyptian characters, #DoctorWhoSoWhite. And watching it now, some 50+ years after it was made, it's interesting to take stock of all of things that make this particular serial so unique. At 12 episodes in length (13 if you count Mission to the Unknown), The Daleks' Master Plan is the longest serial in the "Classic" run of Doctor Who. It has the first Christmas episode. It's the first time we see actor Nicholas Courtney on the show, an actor who would end up making regular appearances throughout the entire Doctor Who series. And for the first time, one of the Doctor's companions dies. Yes, poor old Katarina, the young handmaiden from the ancient city of Troy, dies after being ejected from an air lock. There are actually quite a few deaths in this serial. So many, in fact, that they wouldn't show it in Australia because they deemed it "unsuitable for minors." This serial also has some great episode titles. They stopped naming the individual episodes later on in Season 3, which is a shame when we got titles like "The Nightmare Begins," "Golden Death," and "The Abandoned Planet." Dibs on calling my band Abandoned Planet, by the way. Oh yeah, and the Monk from The Time Meddler shows up for a few episodes. The first time a villain other the Daleks makes a return appearance. Only 3 episodes of The Daleks' Master Plan are known to exist today, which means you'll have to sit through reconstructions of the missing episodes if you want to check this one out. Honestly though, if you're interested in the First Doctor era, it's worth making the effort to see this serial.