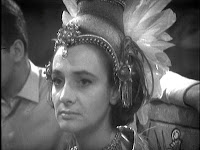 Following its departure from the glassy beaches of Marinus, the TARDIS materializes inside a tomb in an Aztec temple. Barbara is mistaken for the reincarnation of a high priest and attempts to use her new position of power to put an end to the Aztec tradition of human sacrifice. This puts her at odds with the Doctor who is adamant that he and his companions should not attempt to alter the course of history. Barbara’s actions put everyone’s lives at risk as they attempt to discover the secrets of the tomb and return to the TARDIS. Though the logistics and repercussions of the Doctor’s time traveling antics would change throughout the show’s run, The Aztecs marks the show’s first attempt to address these issues. Also, while I get the impression that the early Doctors tend to be somewhat chaste, there is a great plot thread wherein the Doctor makes some cocoa for a woman and ends up engaged to her.

Rating: But you can’t rewrite history! Not one line! Believe me, I know!%

(Image from chrisbaer.net)
Posted by Quammy at 8:41 AM No comments: