I kinda think the budget problems and sloppy direction make this movie  feel most like a TOS episode of all the movies. Anyway, some religious fanatics take over the Enterprise in order to find... Eden... hmm.

The crew of the HMS Bounty (nee Enterprise) must travel back to the 1980s to save the whales. This one manages to skate by the cloyingly ridiculous plot by having terrific character moments from every one of the bridge crew.

Spock maybe isn't so dead after all so Kirk breaks McCoy out of a mental hospital, steals and blows up the Enterprise, and kicks Judge Doom into a lava pit in order to save him.

Kirk's old pal Khan steals a wmd so the good admiral has to stop him with a ship full of students while patching things up with his estranged son. I don't have to tell you things don't work out so great for everybody involved. 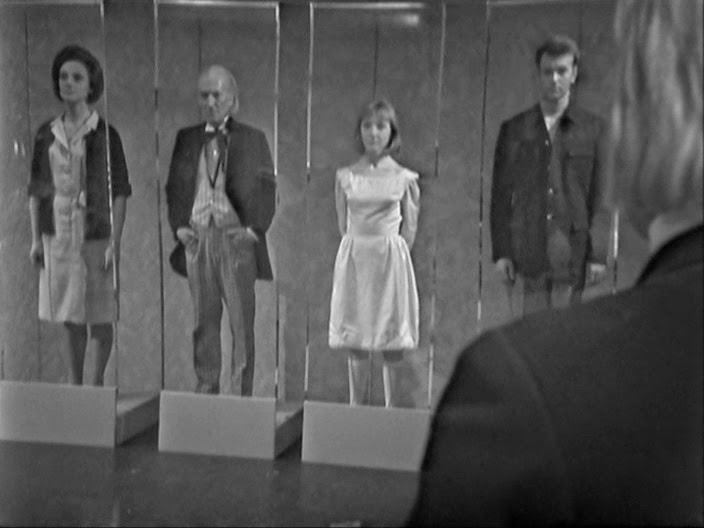 The Space Museum is a bit of a letdown. It's not bad, it's not good, it's just alright. Which is a shame because the first part of the serial is easily one of the best single episodes of Doctor Who that I've seen so far. After a strong start, the remaining installments play out like lackluster retreads of countless previous episodes. There's even a Dalek cameo at one point, which gives our main characters a chance to reminisce about some of their previous (and more popular) adventures. Things work out great for Vicki here though, she not only gets to show off her intellect but she plays a pivotal role in the story. Susan rarely got to be such an active player when she was part of the Doctor's entourage. The serial ends by teasing that the Daleks will once again be facing our heroes, which only reinforces the feeling that The Space Museum is pretty inconsequential.

Rating: I must confess I didn't enjoy the refrigeration%
Posted by Quammy at 6:21 PM 2 comments:

Email ThisBlogThis!Share to TwitterShare to FacebookShare to Pinterest
Labels: Doctor Who, Quammy, The Daleks, The First Doctor, tv review

Kirk and all the old gang team up to stop a giant space cloud from eating planet earth, featuring at least four lengthy sequences of crazy color effects that ought to be choice cuts for any stoner. 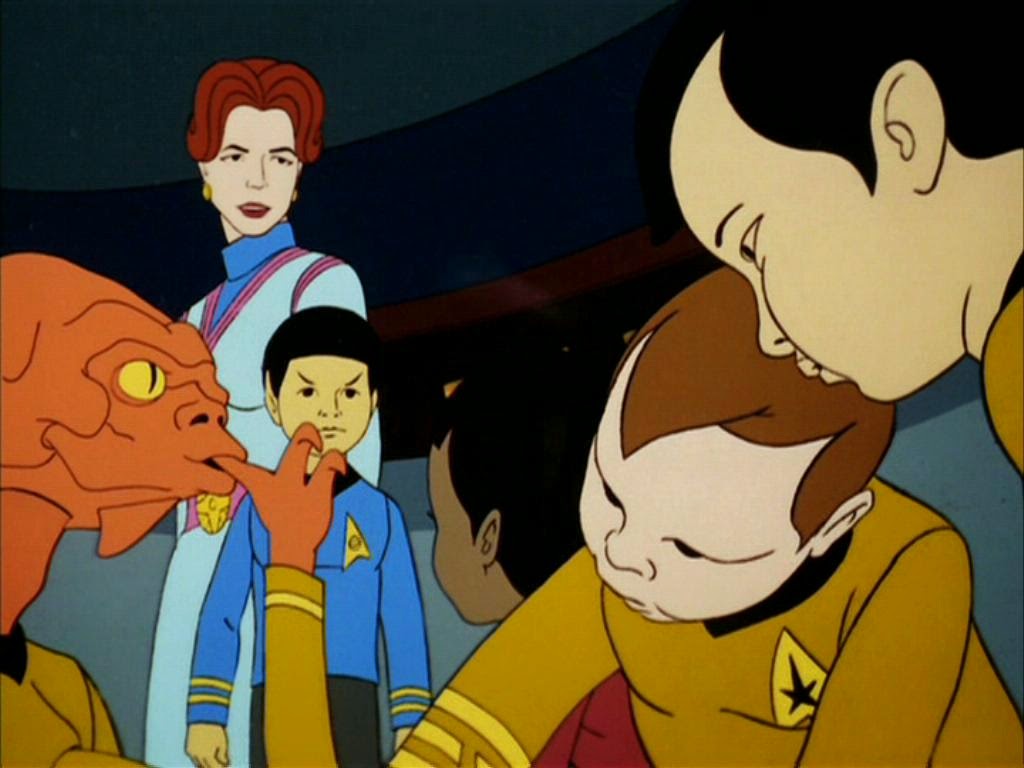 The ship falls through a door to another universe where time moves backwards and everybody becomes kids.

An alien exchange student who can split his body up into pieces accompanies the Enterprise landing party on a mission and fucks everything up big time.

Star Trek - "The Pirates of Orion" 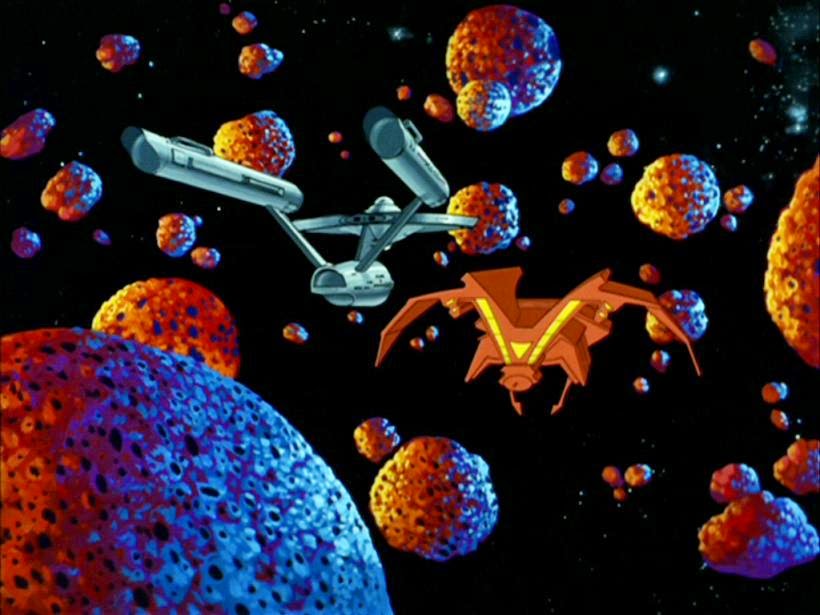 Spock gets a lethal case of the space sniffles so the Enterprise must get him some medicine that has, unfortunately, been stolen by Orion pirates. 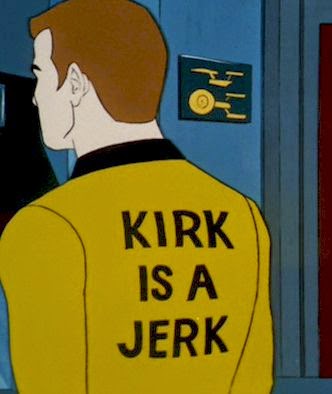 While escaping some Romulans the Enterprise runs through a space storm which infects the computer with a major case of the sillies. It starts playing hilarious jokes on the crew like hitting Scotty with a pie, getting the ship high on laughing gas, and nearly killing Sulu, McCoy, and Uhura in the holodeck. Ok maybe you had to be there for that last one.

On vacay in Australia the women from Omega Squad point out how sexist Vulcan is while getting in a huge barfight. Meanwhile Nog opens his roommate's mint condition 1960s comics to read but get real, if anybody had a 400 year old comic book still in mint condition they'd be king of planet earth.

(Where to place: DS9 season four, between For The Cause and To The Death.)
Posted by DCP at 4:00 PM No comments:

Star Trek - "How Sharper Than a Serpent's Tooth"

Ok, just take the plot of Who Mourns for Adonais and sub in Kukulkan for Apollo.

Star Trek - "All Our Yesterdays" 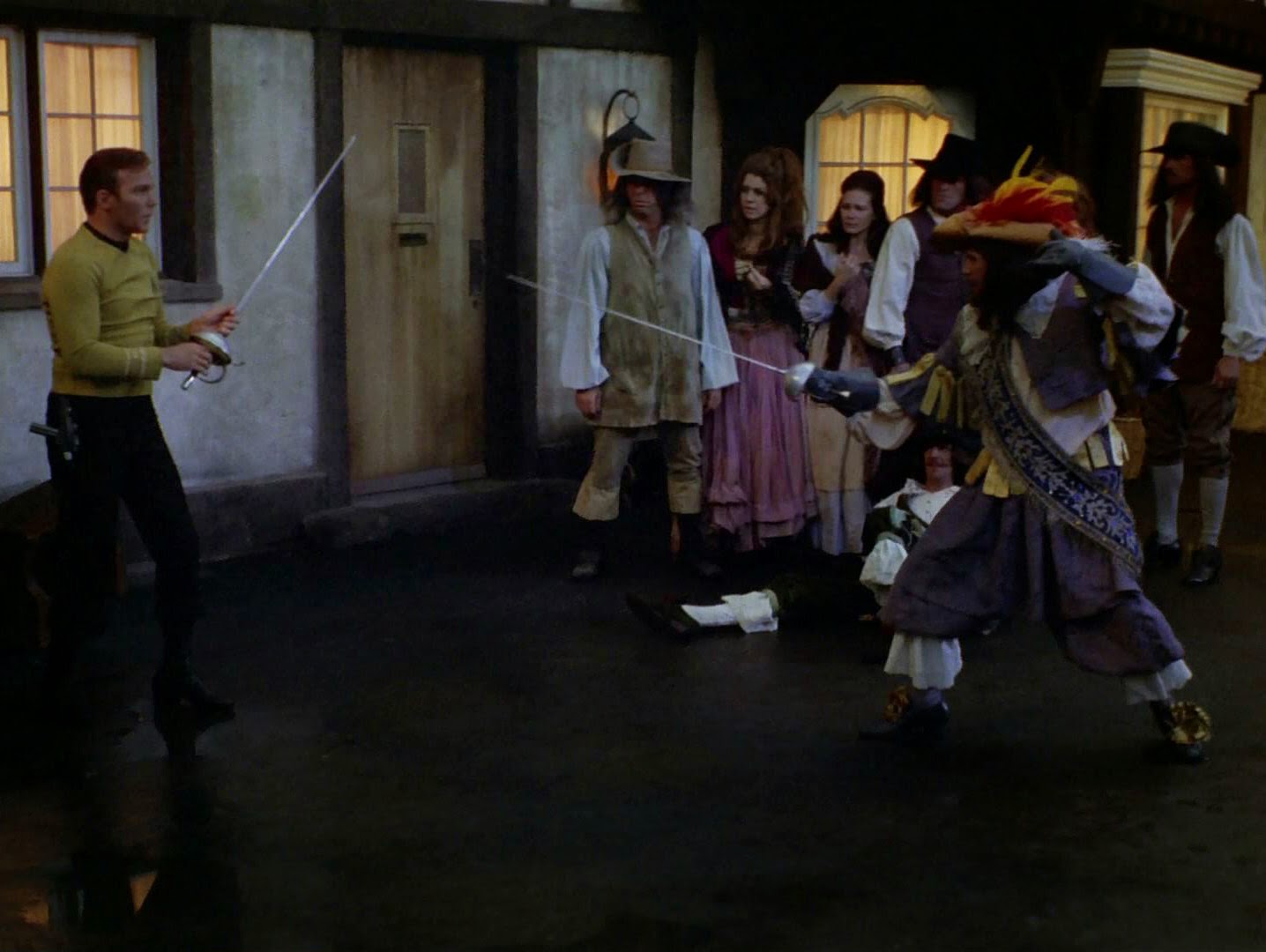 Checking out a planet whose star is about to explode, Kirk, Spock, and McCoy wind up trapped in its past, where Spock falls in love with an ice woman and Kirk is jailed for witchcraft. 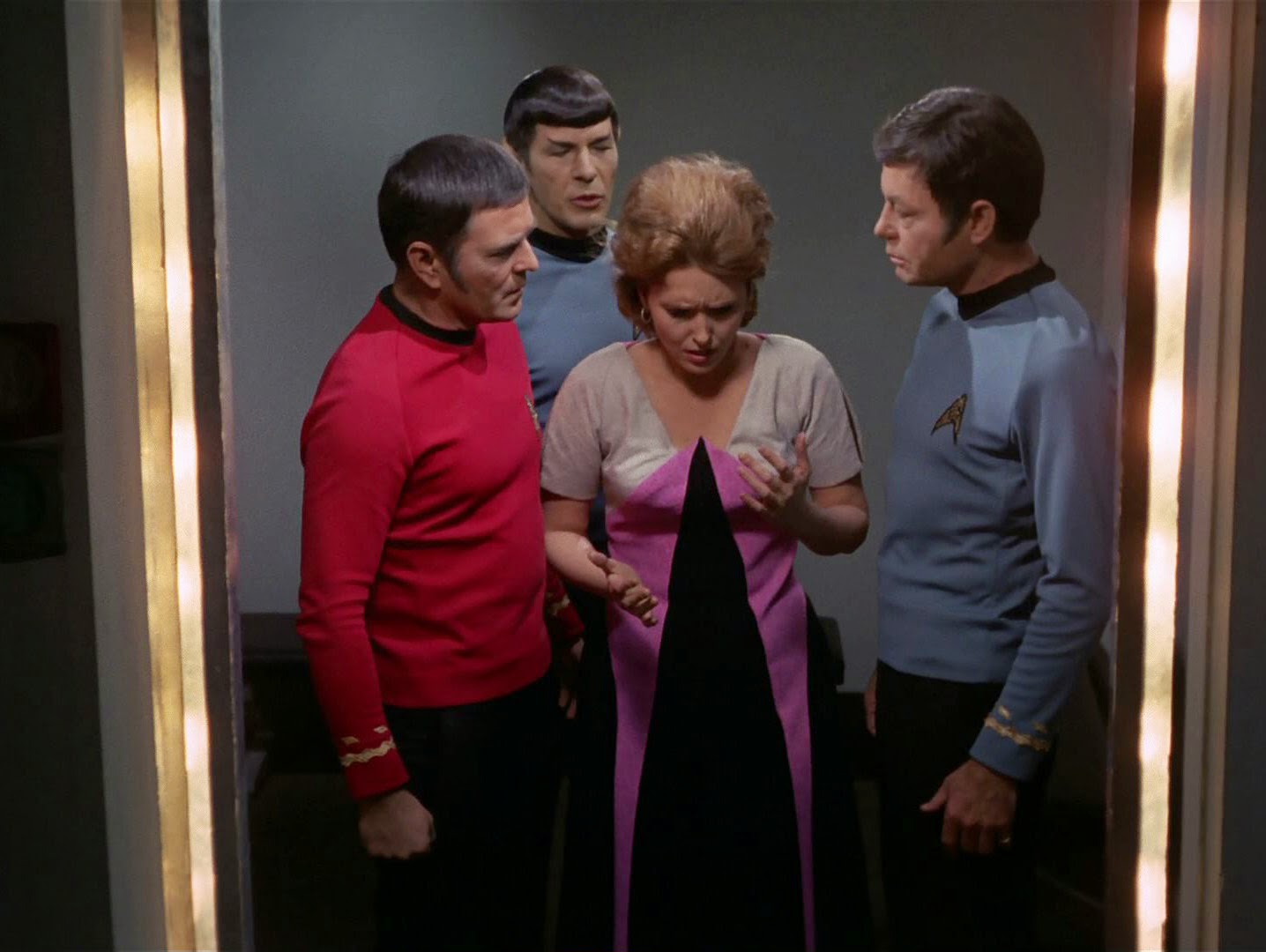 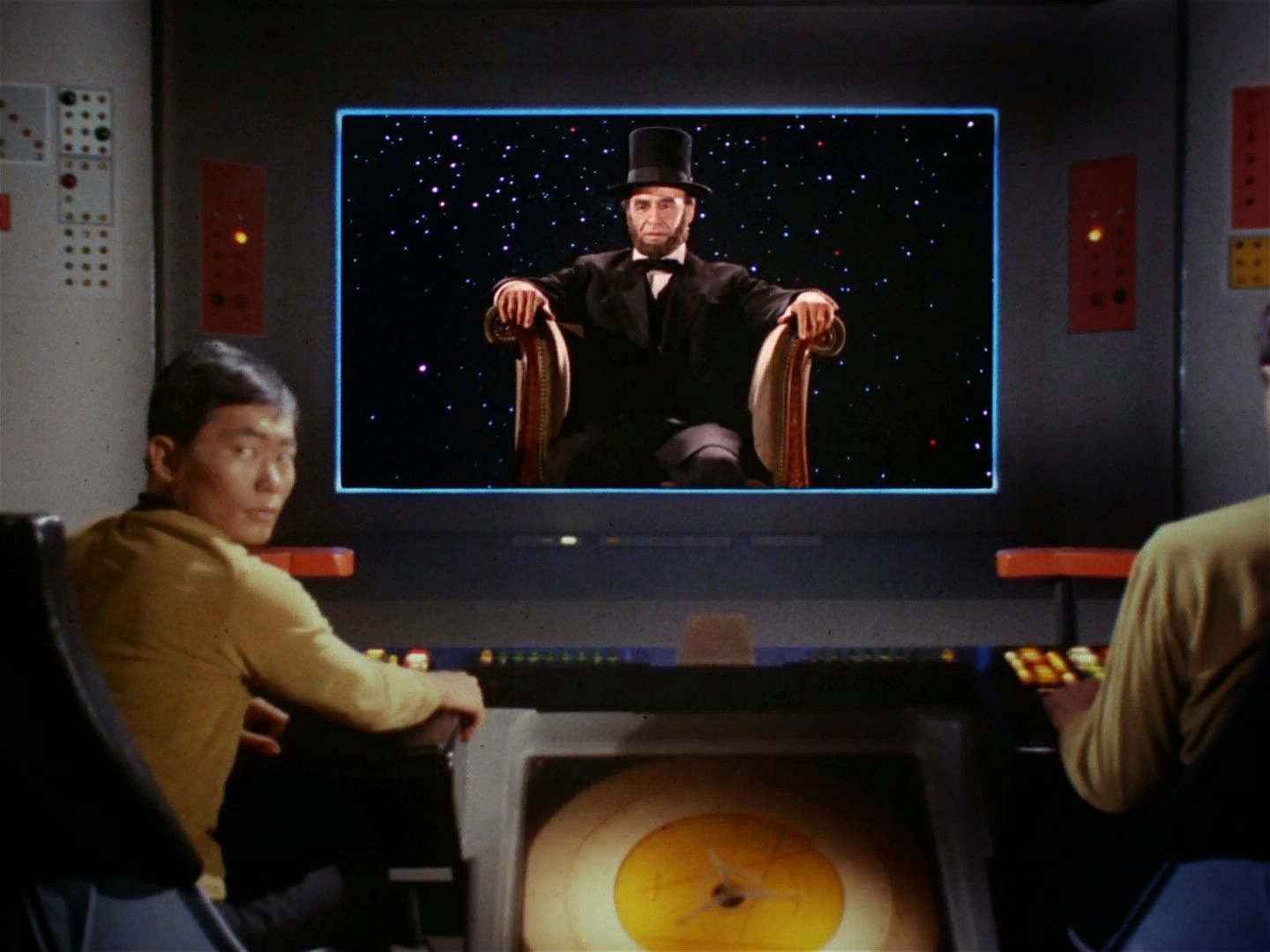 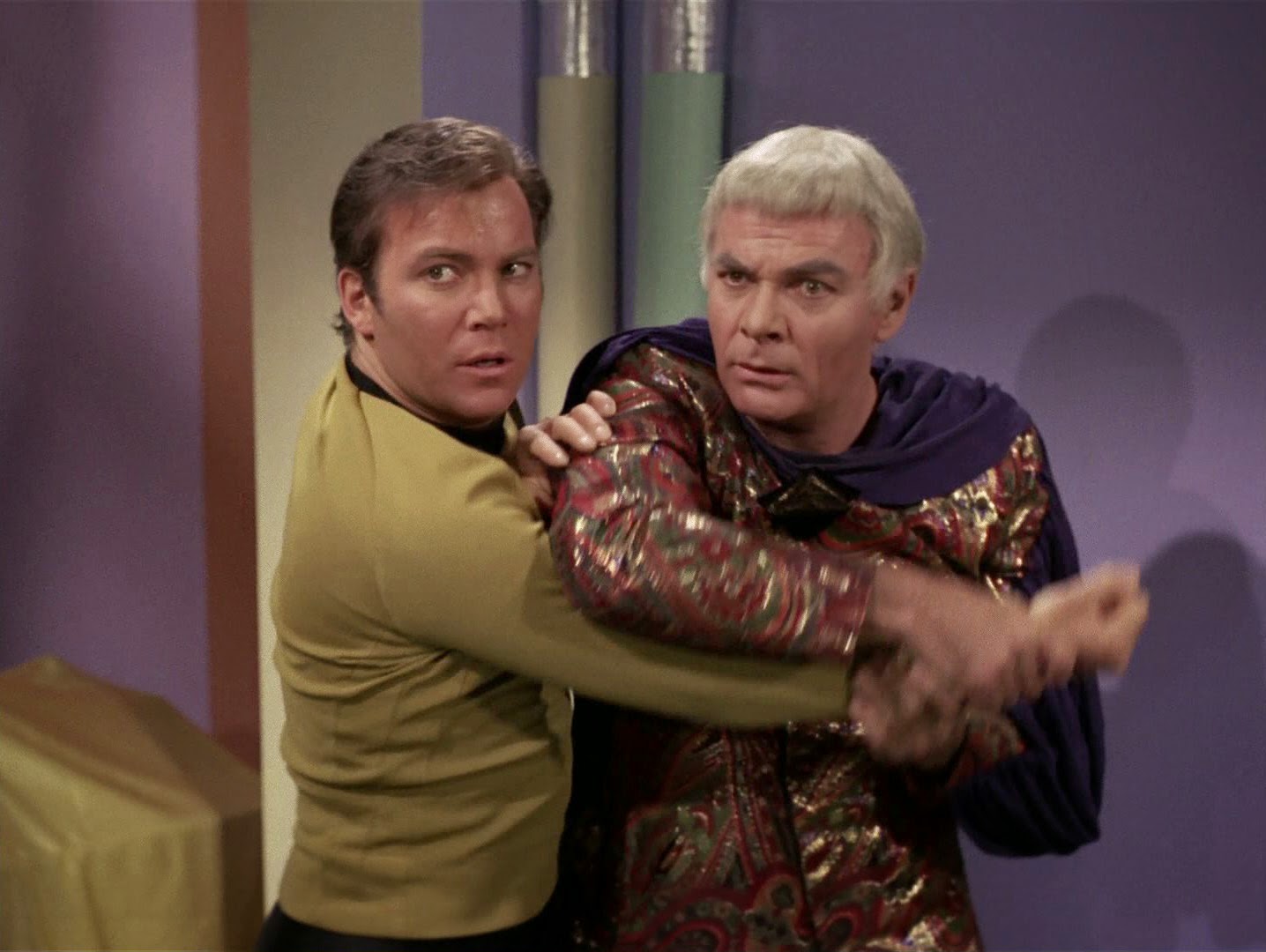 Kirk has to fight Leonardo da Vinci over who gets to love a robot. 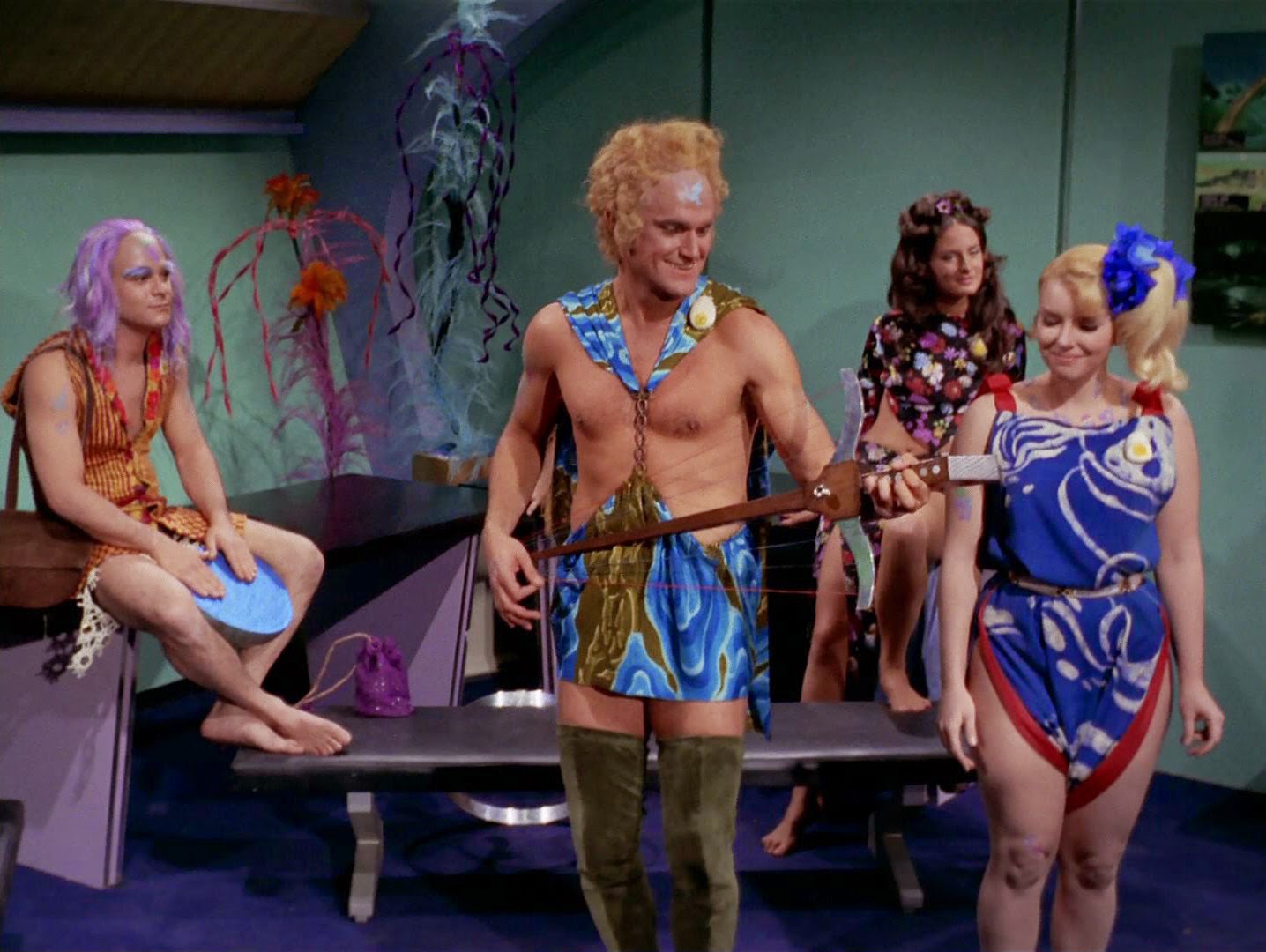 An anti-vaxxer and his flock of space hippies steals the Enterprise to travel to Eden, aka Planet Acid.

(Alternate Ending)
Posted by DCP at 12:00 PM No comments:

A fancy city "with no violence" and which "focuses on art" winds up being a bunch of aristocratic one percenters who rose to power on the backs of the poor. 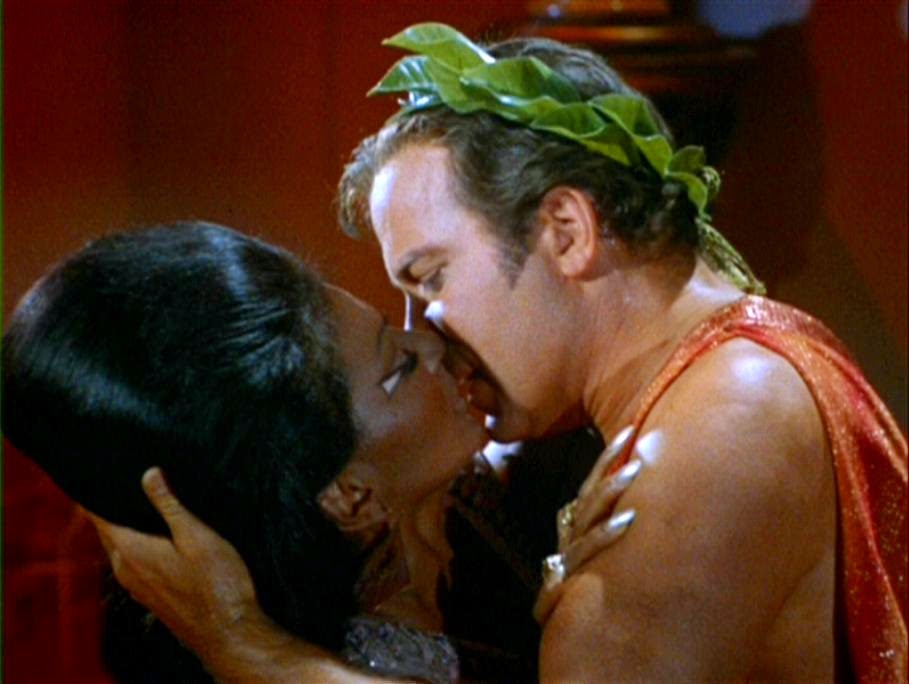 Rushing to help out some adult god-children, the Enterprise gets (of course) held hostage and Kirk, Spock, Uhura, and Chapel are forced to put on a space pageant with like no rehearsal time.

The Enterprise comes across a decrepit Apollo, and as the ship is disabled by some space goo he starts getting people to worship him again, which makes him younger and more virulent (hubba hubba).

(Where to place: Between That Which Survives and Plato's Stepchildren.)
Posted by DCP at 11:00 AM No comments:

Star Trek - "That Which Survives" 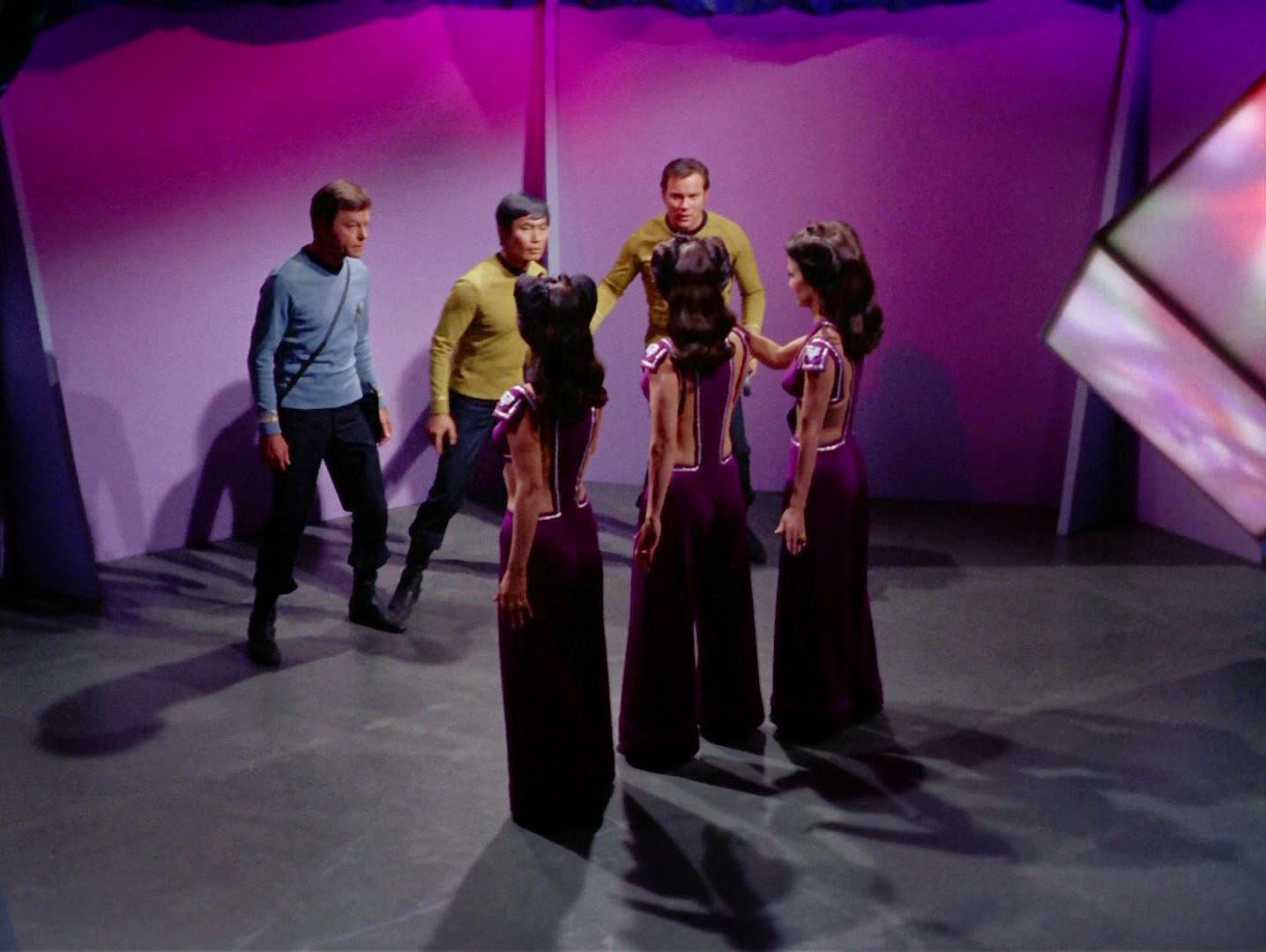 A scary episode with an android lady programmed to kill. The weird line-vanishing effect/with spooky voice music cue whenever the android disappears terrified me as a kid.

Star Trek - "Let That Be Your Last Battlefield"

I'm totally cool with the over the top proselytizing/didacticism going on here, but the show sorta takes that awful stance of "well, racism is wrong but it's wrong on both sides."

Star Trek - "The Lights of Zetar"

Wandering sentient space lights take over this episode's guest star - a pretty thin plot but makes up for that with lots of surrealist visual and aural soundscapes typical to third season TOS. 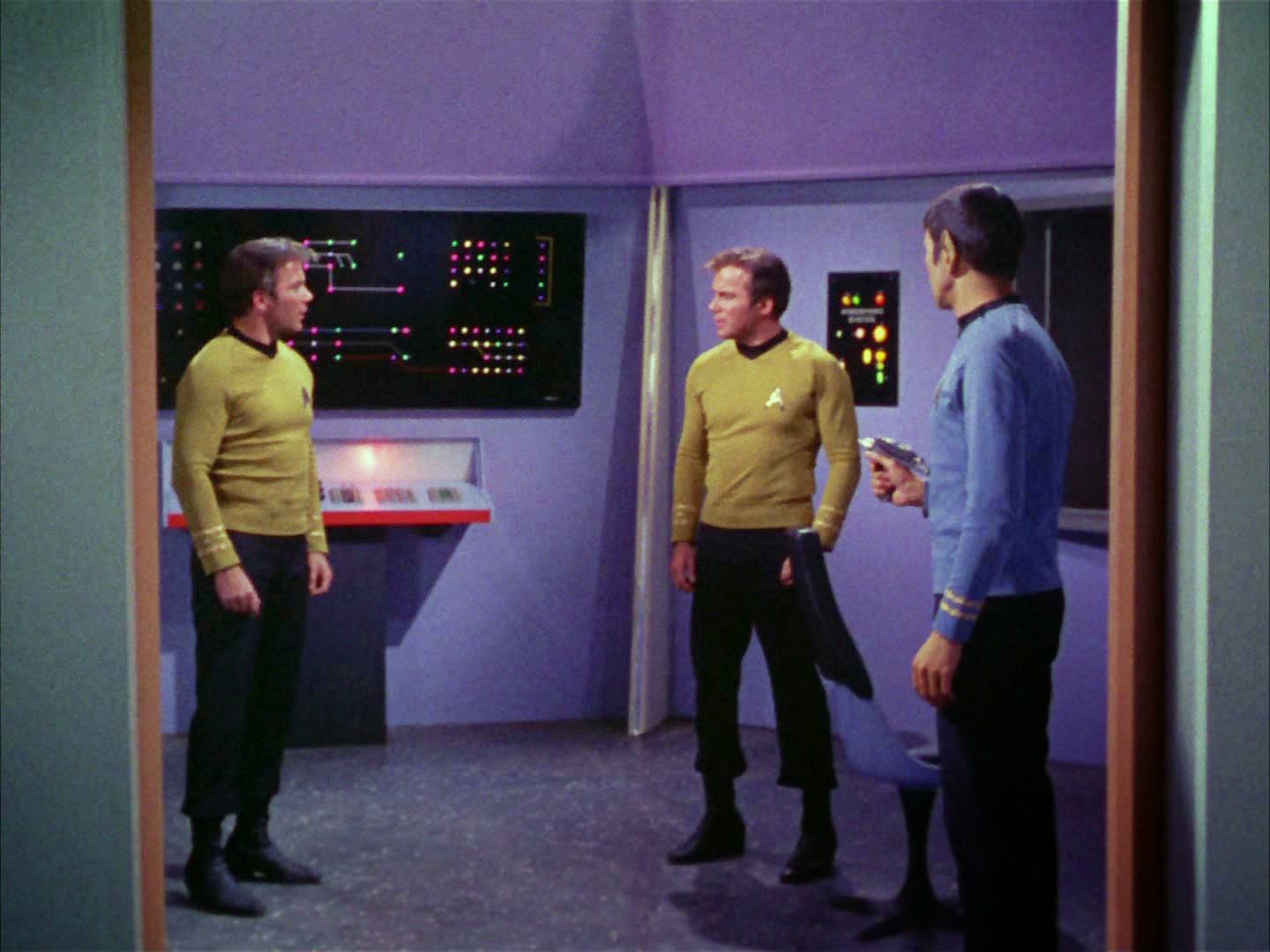 Terrifically over the top episode where a madman can take the shape of whomever, so of course Kirk must fight himself.

Some space people who move at hyper accelerated speeds lure the Enterprise to their planet so they can bang all the dudes and get pregnant. (The hyper speed thing is interesting but Voyager does it wayyyyy better.) 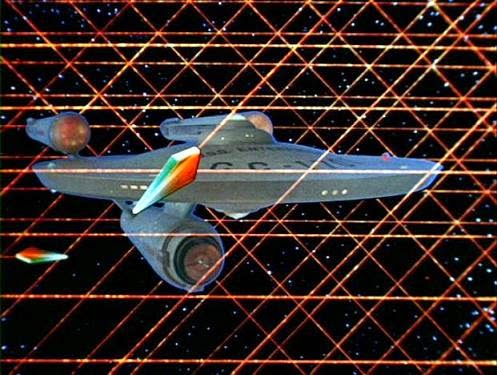 A ghost ship eats Captain Kirk while dimension waves are making everybody else murderous, two things that would cause enough problem if the titular crotchety aliens weren't slowly weaving a laser basket around the Enterprise, too.

Kirk, Spock, and a wide variety of weird aliens team up to rescue a glowing mobius strip.

Star Trek - "Is There No Truth In Beauty?" 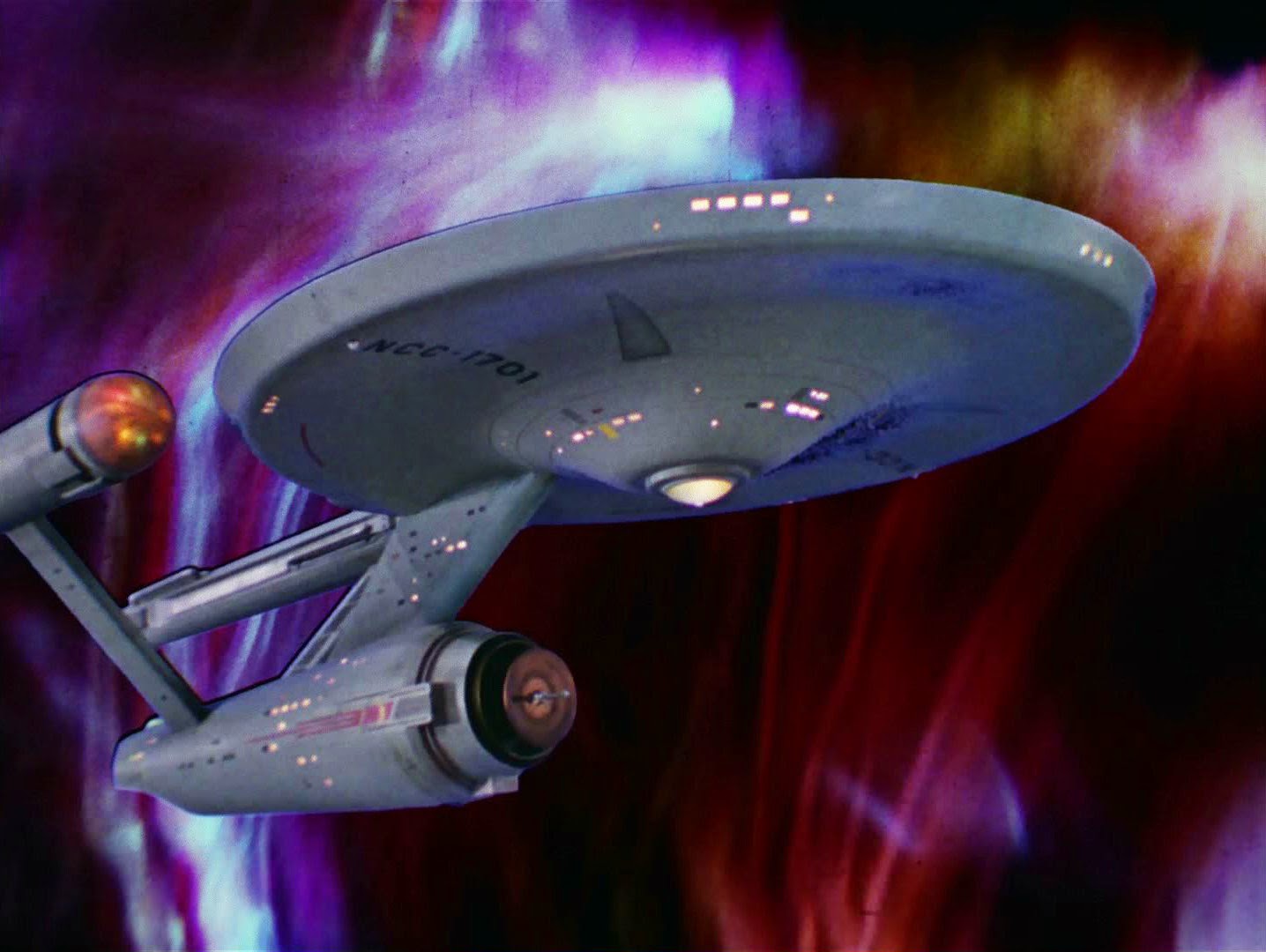 An alien so hideous it can drive humans insane (really? scientifically hideous?) comes on board as an ambassador for the Medusans and in the course of human events the ship gets knocked out of known space.

Star Trek - "Once Upon A Planet"

Uhura gets captured by the computer that runs the vacation world from Shore Leave and must convince it that the ship's crew are not the Enterprise's servants.

A ball of space light that consumes rage (talk about hangry!) pits the Enterprise crew against some Klingons in swordplay. 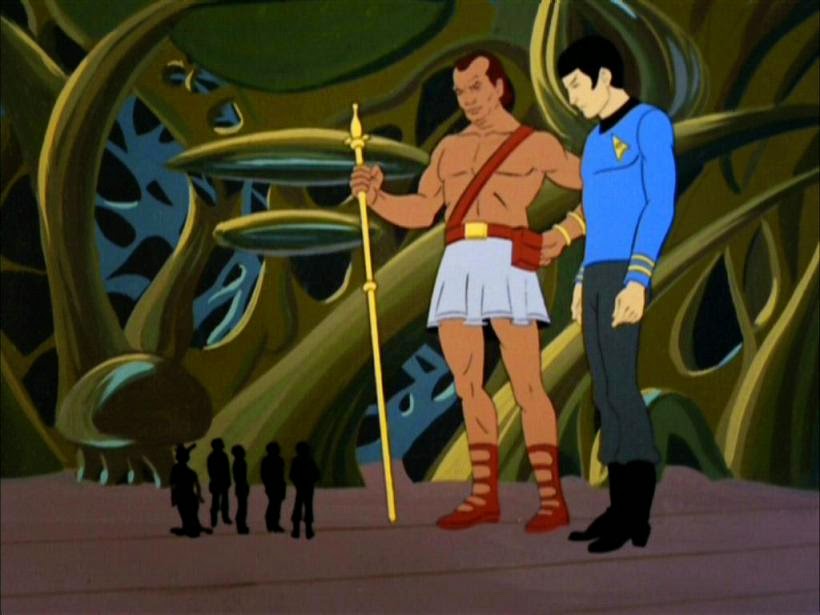 Aka "Honey, I Shrunk The Crew."

Star Trek - "The Eye of the Beholder"

Highly advanced sluggos kidnap Kirk, Spock, and McCoy to put them in a space zoo.

Kirk and Spock get turned into mermen by some giant sea monkeys while checking out a water planet.

Some aliens pipe a siren song into the Enterprise, taking control of all the men, so Uhura gets a chance to be in command as she and Chapel save the dudes! 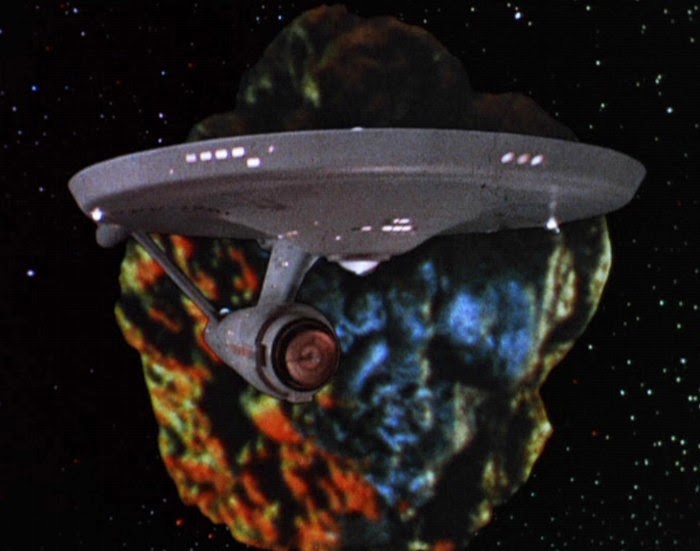 McCoy gets super sick so he goes to live in a doomed asteroid run by a mean ole space computer and also he falls in love with one of the computer's priestesses. 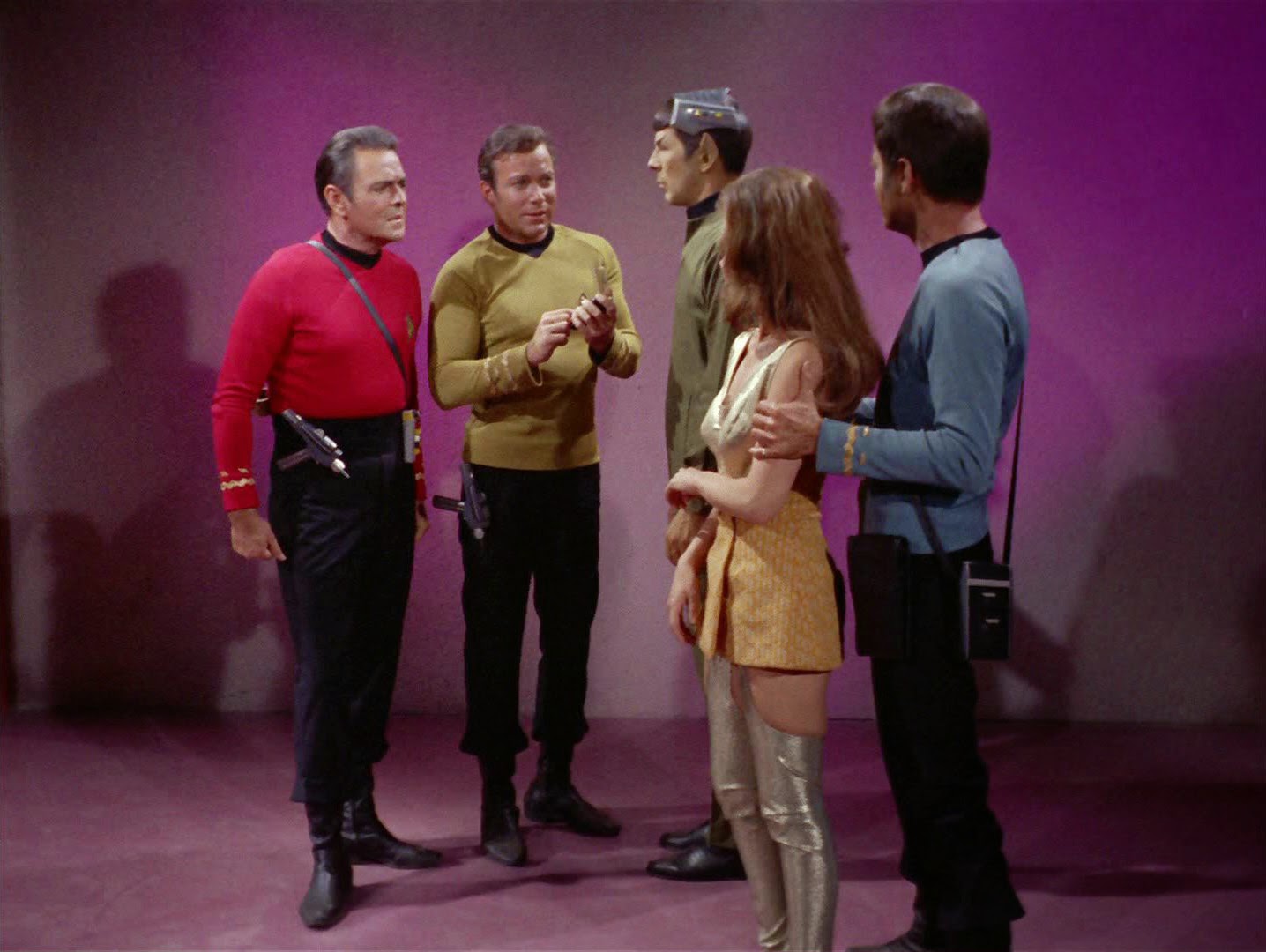 Star Trek - "The Mark of Gideon" 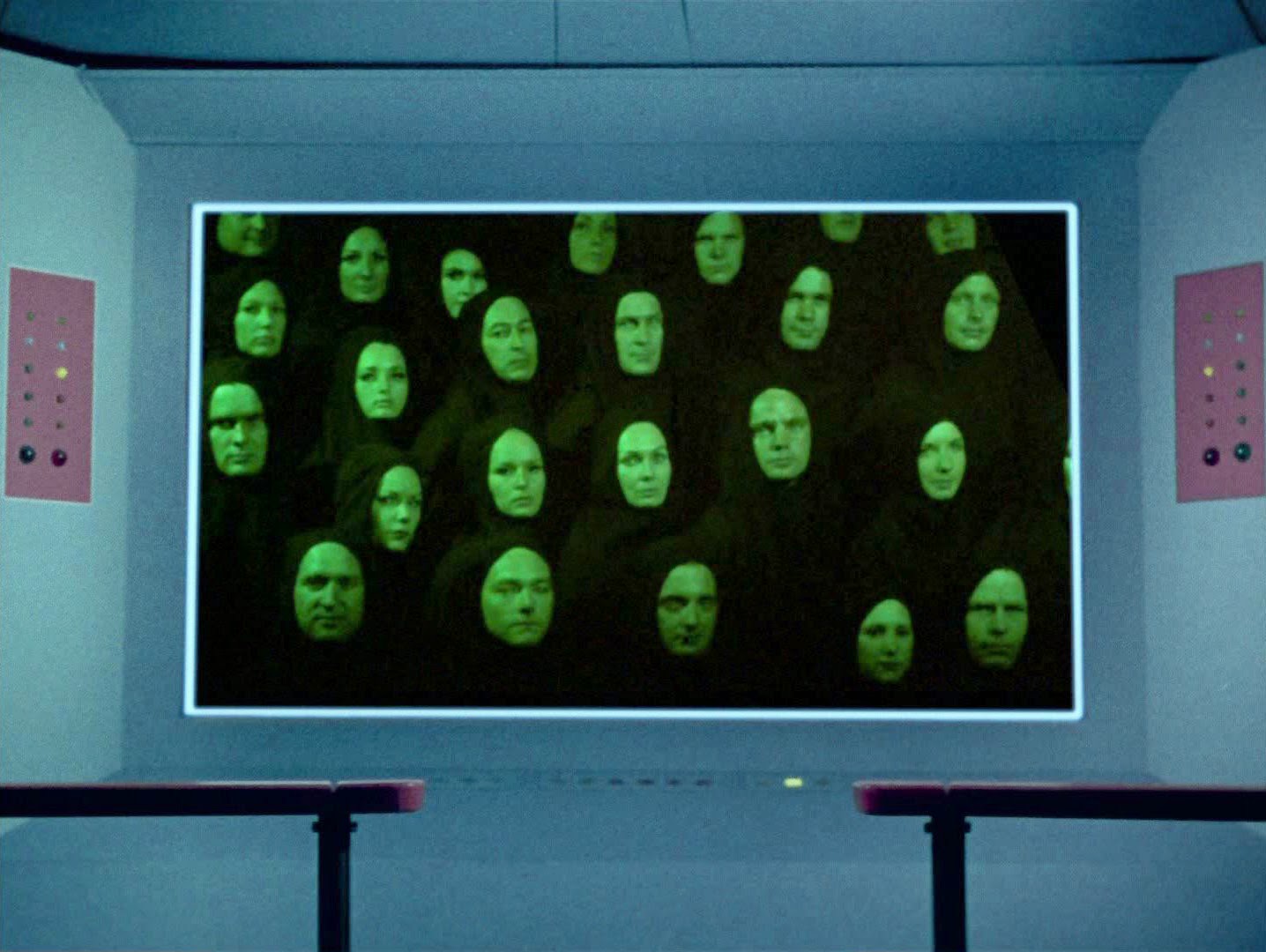 Kirk is kidnapped and placed on an exact replica of the Enterprise so he can introduce illnesses to a planet that suffers from overpopulation. The shots of weird crowds looking into the fake Enterprise windows are creepy, but Spock has a bizarre hatred for diplomacy here. Like, what, you wanna shoot them, big guy? 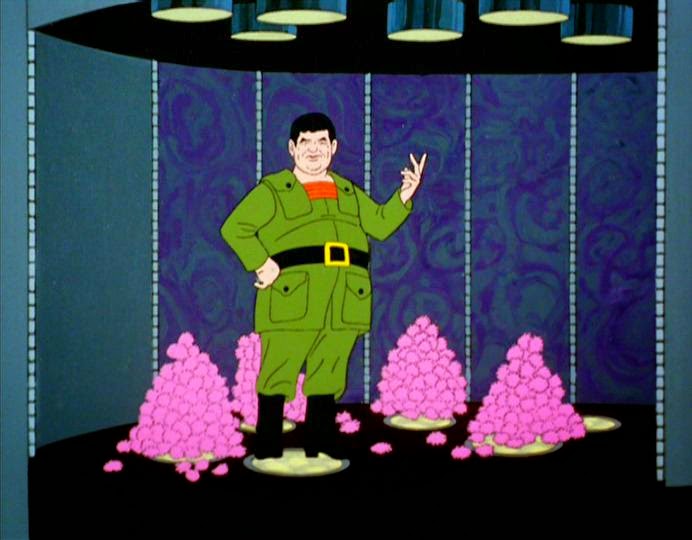 While escorting some grain freighters, the Enterprise saves Cyrano Jones from angry Klingons and, if you couldn't guess from the title, he brings aboard more tribbles, thereby causing more bullshit. 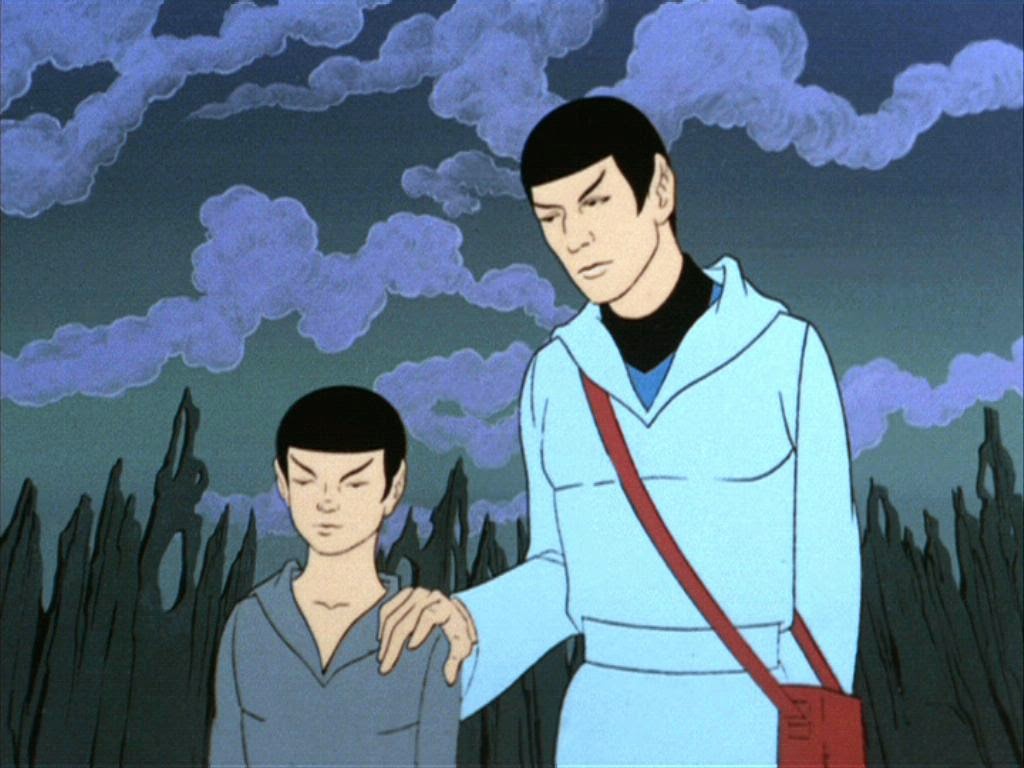 Spock has to travel back through the Guardian of Forever to save his child self from death and no I did not just cry at a 1970s Saturday morning cartoon thank you very much.

Star Trek - "One of Our Planets is Missing" 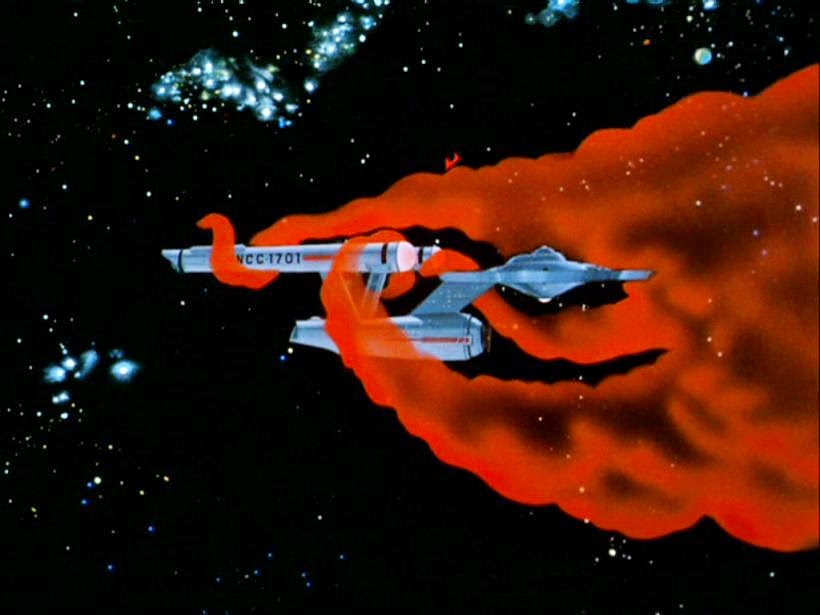 The Enterprise must stop a giant cloud from... eating a planet... by... explaining humanity... hmm.

McCoy gets accused of decimating a planet with a plague so while the Enterprise tries to clear his name everybody gets infected with a space aurora borealis.

The Enterprise must work with some Klingons to escape a pocket dimension that exists out of time, featuring Nichelle Nichols as the voice of like six different characters.

Star Trek - "Beyond the Farthest Star"

The Enterprise is pulled by an unknown force to a dead star, around which orbits a 300 million year old insect ship on which the crew committed mass suicide. You know, typical Saturday morning cartoon stuff.

The ship picks up a dude long thought dead but, actually, it's a shape shifter working for the Romulans.

Some big brain aliens kidnap Kirk, Spock, and McCoy because they are studying feelings with an imprisoned empathic lady. This one is kind of hazy and dull.

Star Trek - "And The Children Shall Lead"

Some kids and their fear-worshipping friend take over the Enterprise with scary hallucinations.

It's a bit crazy how many episodes hinge on a member of the crew seducing an enemy. Like, how'd they know the commander would even be remotely interested in Spock??? 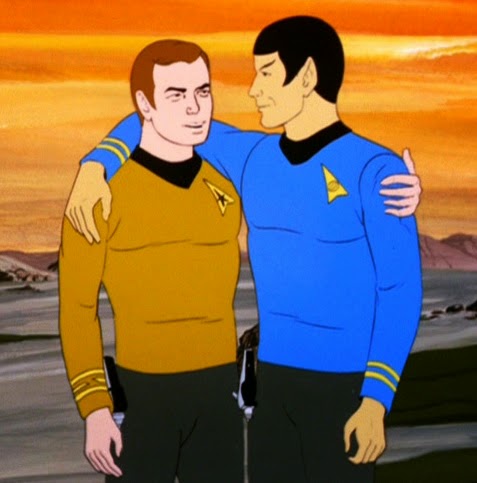 Harry Mudd, jailed on the Enterprise , convinces Chapel to use a "love drug" on Spock (not cool imho), but of course everything backfires and rock monsters are fought before the day is done. 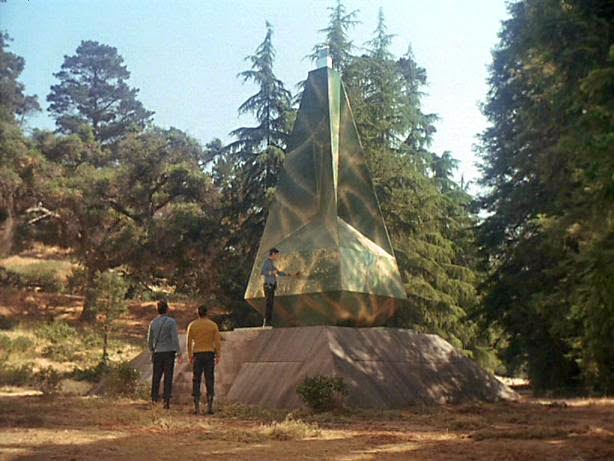 A kinda racist episode in which Kirk loses his memory and marries an American Indian woman he finds on a planet. The end is sad, but showing the American Indians as simpletons before Kirk comes along is v racist.