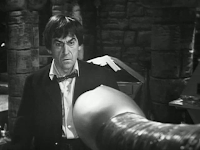 The Krotons is a bit of a disappointment. Following The Mind Robber and The Invasion, The Krotons is just too formulaic. It's very similar to The Dominators and a few of the other unimaginative "base under siege" stories. The Doctor and his companions arrive on a planet populated by the Gonds and their mysterious overlords, the Krotons. Centuries earlier the Gonds and the Krotons were at war but they have since settled into an uneasy truce. The Krotons use their advanced technology to educate the Gonds, asking only that the smartest of the Gonds become their "companions." The Doctor soon discovers that these "companions" are used up and disposed of by the Krotons, while the rest of the Gonds are kept in the dark. Will the Doctor solve the mystery of the Krotons and stop them before it's too late? Yes, yes he will. Also, the Krotons look like really crappy versions of Robby the Robot.

Rating: Zoe is something of a genius. Of course it can be very irritating at times%
Posted by Quammy at 1:21 PM No comments: