Another 12 Days of Christmas Specials: The Christmas Toy 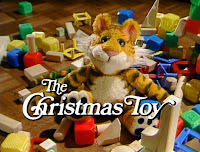 When you think about Jim Henson, the first thing that springs to mind would probably be the Muppets and rightfully so because the Muppets are awesome. But Jim Henson did a lot of non-Muppet work, from childhood nightmare inducing films like Labyrinth and the Dark Crystal to Christmas Specials like The Christmas Toy. The story of The Christmas Toy is similar to Toy Story, wherein we witness the behind the scenes world of toys when no one is around to see them. In the special, all the toys are getting ready for Christmas morning and the arrival of the new toys that will be joining them in their world behind closed doors. It's a decent special, featuring the traditional felt-style puppets we've come to know and love along with some animatronic-type puppets that seemed pretty innovative for their time. While it's nowhere near the sheer joy that is A Muppet Family Christmas, The Christmas Toy is still a pretty good Christmas Special.

(Image from muppet.wikia.com)
Posted by Quammy at 3:39 PM No comments:

Of all the Christmas Specials I've watched and reviewed so far this year, The First Christmas was the only one that did not feature Santa Claus in any way. Most Christmas Specials toss in an obligatory nod to Jesus, but rarely get too religiousy. While The First Christmas wasn't about anything specifically religious, it was focused on a bunch of nuns and an orphan shepherd boy who had been blinded by a bolt of lightning (not kidding about that last part, this is a Rankin/Bass special aftterall). The main nun, voiced by Angela Lansbury, pines for a white Christmas like the ones she knew as a child. Lucas, the blind shepherd kid, wants nothing more than the kind nun to get her wish. You can imagine how it all turns out.

(Image from demonoid.me)
Posted by Quammy at 12:56 PM No comments: 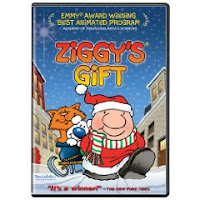 Sometimes you have to dig through a lot of shit before you can uncover a diamond in the rough (how's that for a mixed metaphor?), but it's all worth it when you find something like Ziggy's Gift. I don't want to oversell it, because having low expectations before I watched it probably increased my overall enjoyment, but Ziggy's Gift is a great Christmas Special and more people should check it out. Everyone and everything is seemingly out to get our little protagonist (including a cop that reminded me of Chief O'Hara from the old Batman TV show), but he either doesn't notice or doesn't let it bother him. Volunteering as a street corner Santa, Ziggy spreads goodwill and Christmas cheer despite all the crime and corruption around him. It's great, heart-warming stuff. Do yourself a favor and check it out.

Another 12 Days of Christmas Specials: Mr. Hankey, the Christmas Poo 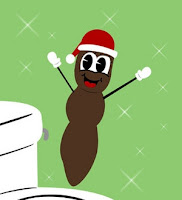 My uptight high school physics teacher made a point of telling all of us that he thought South Park was a terribly racist show that none of us should ever watch. His only exposure to the show was the first season episode, Mr. Hankey, the Christmas Poo. And while South Park has always mined tasteless and offensive material for laughs, there really isn't much that seperates Mr. Hankey, the Christmas Poo from your standard Christmas Special. Cherished characters come together during the festive season to sing catchy songs (I've had the Mr. Hankey song stuck in my head for three days) and learn important lessons about what the Holidays are really all about. Would anyone else have thought of doing all that with an anthropomorphic piece of shit? Probably not, but yuletide inspiration can come from just about anywhere.

(Image from mmmmfood.onsugar.com)
Posted by Quammy at 5:26 PM No comments:

Another 12 Days of Christmas Specials: The Pink Panther in: A Pink Christmas

If Charlie Chaplin's film Modern Times had been about a jazzy pink feline, it probably would have looked something like The Pink Panther in: A Pink Christmas. The special follows our homeless hero as he attempts to stave off starvation over the holidays. Sure, it's a bit dour, but it's still nowhere near the schmaltzy sentiment of something like ALF's Special Christmas. I remember seeing this special on TV as a kid, but I'm not surprised that it isn't really on anyone's radar anymore. There really aren't any standout moments in the special, nothing that would warrant adding it to your yearly slate of must-see Christmas Specials. Because everyone has a list of must-see Christmas Specials, it's not just me, right?

(Image from tvshowsondvd.com)
Posted by Quammy at 8:13 PM No comments:

Another 12 Days of Christmas Specials: A Very Special Christmas with Beavis and Butt-head 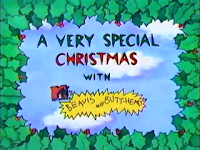 Rating: Something that Sucks%

(Image from beavisandbutthead.wikia.com)
Posted by Quammy at 7:21 PM No comments: 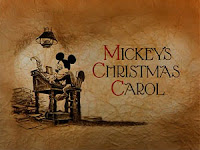 For me, watching Mickey's Christmas Carol again was like slipping into some warm footie pyjamas and curling up under the Christmas tree. It's probbably been some time since I last saw this special from start to finish but, for as long as I can remember, Mickey's Christmas Carol has always been the benchmark against which I judge any adaptation of Dickens' A Christmas Carol (that said, Scrooged is also pretty sweet). Nostalgia aside, I think the special holds up pretty well. The bits with the Ghosts of Christmas Present and Christmas Yet to Come are kinda dark, given that it is a Christmas Special aimed at children. And I always thought the part with Goofy in chains as Jacob Marley was kinda freaky too. All that aside, if you can watch this special and not come close to tearing up at the sight of Mickey at Tiny Tim's grave, clutching the crutch as a single tear forms under his eye, well then you might just be a robot.

Rating: A Handwritten Letter from an Old Friend%

(Image from Wikipedia)
Posted by Quammy at 9:27 PM No comments:

Another 12 Days of Christmas Specials: A Flintstone Christmas 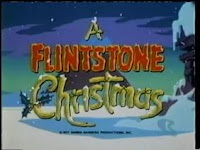 For the most part A Flintstone Christmas is your standard Christmas Special: familiar characters, holiday setting, treacly songs, etc. Being the cynic that I am though, I couldn't help but think that Santa comes off as a bit of a dick in the special. Fred and Barney are drafted by Santa to do his rounds after Santa slips off Fred's roof. Santa spends most of his time complaining and insulting Fred. Sure, Fred took a lot of abuse on the Flintstones, but you'd think Santa, of all people, would have cut the guy some slack.

(Image from abundance-blog.marelisa-online.com)
Posted by Quammy at 3:38 PM No comments: 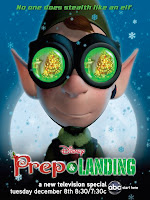 After wallowing in the woe that was ALF's Special Christmas, it was so nice to watch a nice, wholesome, entertaining Christmas Special like Disney's Prep & Landing. I'm guessing that Disney's ownership of Pixar helped tremondously in both the story and visual construction of this special. The character designs are fantastic and the story is well written, relaying a fast paced story that will appeal to kids but not make anyone over the age of 9 want to kill themselves. The special follows Wayne, one of Santa's elves in the Prep and Landing department (voiced by former Kids in the Hall member Dave Foley), who's feeling down after being passed over for a big promotion. Wayne is depressed over his failing career but the special does well not to dwell on it, we never come anywhere near ALF level misery here. So on the big night, Wayne and Lanny, Wayne's overly enthusiastic rookie partner, run in to some trouble prepping little Timmy's house and delightful (though predictable) hijinks ensue. I can honestly say that Prep & Landing was a nice, fun Christmas Special. One that I will likely revisit in the coming years.

(Image from impawards.com)
Posted by Quammy at 12:39 PM No comments:

There's a commonly held misconception that the suicide rate rises over the Christmas season. I first learned about this urban myth as a child while watching ALF's Special Christmas. It's normal for a Christmas Special to try and tug at your heart strings, but ALF's Special Christmas draws a warm bath for you and hands you a razor blade. If you think I'm exaggerating, consider this, there's a scene where ALF says goodbye to a dying girl in a hospital and they actually put a fake tear on ALF's face. And there's another scene where ALF, dressed as Santa, talks a suicidal guy out of jumping off a bridge. This is easily the most maudlin thing I've seen in a long time.

Rating: A Prescription for Prozac%

Another 12 Days of Christmas Specials: The Year Without a Santa Claus

I love stop motion animation, but what always attracts me to Rankin/Bass specials is the fact that they're usually quite weird. Rudolph has it's share odd characters and moments, but The Year Without a Santa Claus is a whole bundle of bizarre. Basically Santa decides he's tired and underappreciated, so he decides to cancel Christmas and take the year off. The rest of the special is Mrs. Claus and some elves trying to convince Santa that people still believe in him and that there's still goodwill out in the world. They go about this by trying to get two freaks called Heat Miser and Snow Miser to set aside their differences so that it can snow in a small Southern town on Christmas. Essentially, there is a wholesome Christmassy message in there, but it's wrapped up in classic Rankin/Bass weirdness.

(Image from ioffer.com)
Posted by Quammy at 12:52 PM No comments:

Last year, in the spirit of the season, I reviewed twelve Christmas Specials. I ended up covering a few of the classics, some personal favorites and one or two oddball choices (I'm looking at you, He-Man and She-Ra: A Christmas Special). I decided to try to review another batch of Christmas Specials for this year, but I'm a little worried that I'm not going to have a lot of choice material to work with this time. There's only so many Rudolphs and Grinchs to go around. This is part of the reason I'm kicking off this year's series of reviews with Inspector Gadget Saves Christmas, a Christmas Special that few people have likely seen and even fewer people would purposefully seek out. Aired in 1992, several years after the show's regular run had ended, the special essentially follows the same formula as a standard episode of the Inspector Gadget series. Dr. Claw has taken over the North Pole and is trying to sabotage Christmas. Inspector Gadget is tasked withing saving Santa Claus and preventing a holiday disaster and despite his best efforts, he manages to do just that. I'm not sure why they made this special and/or who the intended audience was for it, but I suppose it could have been worse. I'm not sure how exactly, but it's possible.

(Image from jeffco.ca)
Posted by Quammy at 1:43 PM No comments: