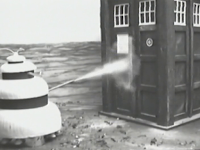 Sometimes appearances can be deceiving. Like when you arrive on a new planet, it's possible that the bumbling robots with the stun guns aren't actually the bad guys. It's also possible that the warrior women who help you out might be planning on imprisoning and murdering you. And maybe this new planet might be on the verge of exploding. Life can be funny like that. It's a shame that most of Galaxy 4 is still missing. Not because it's a particularly noteworthy serial, mostly because there are some interesting creature designs that we don't get to see. There is a species of alien in this serial called the Rill. They breathe ammonia and control little robots that look like the Daleks, if the Daleks were made out of Dairy Queen soft serve ice cream. We only get a glimpse of the Rill in the surviving footage, but various reconstructions suggest they might have looked like a cross between Jabba the Hutt and the monster from It Conquered the World. Sadly, we may never get to see the Rill in all their original glory. (It's really not that sad.)

Rating: Not just nothing, child%
Posted by Quammy at 4:34 PM No comments: