The Claws of Axos 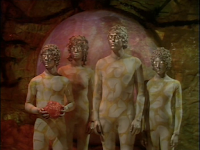 You could certainly argue that The Claws of Axos is more sizzle than steak. The plot is fairly simple, there are a few too many characters and there's some extremely (unnecessary) broad comedy in places. But, I'll be damned if it doesn't make for some great sizzle. There are some amazing sets and costumes in The Claws and Axos. Everything is supposed to be organic and alive and they manage to pull it off pretty decently. The visual effects really stand out as well. With loads of psychedelic colors swirling about and funky projected backgrounds. It's hardly a surprise that the Master is back, though it's nice to see him at a slight disadvantage this time around. There are some interesting developments in the serial's back half after the Master repairs the Doctor's TARDIS and the two Time Lords briefly team up. Jon Pertwee's Doctor was always looking to get out of his exile and, for a brief moment, he took an opportunity to escape. In the end of the serial, though, it's revealed that his TARDIS has been programmed to automatically return him to Earth. So, despite his best efforts to leave Jo and UNIT behind, he ends up right back where he started.

Rating: Nothing, my dear Holmes%
Posted by Quammy at 4:59 PM No comments: