It would seem that if you're one of the Doctor's female companions, an ankle injury is the equivalent of a death sentence. At the beginning of The Dalek Invasion of Earth Susan hurts her ankle, by the end of the story she is left behind by the Doctor. At the start of The Myth Makers Vicki is nursing an injured ankle (an injury sustained at the end of Galaxy 4) and by the end of the serial she is allowed to stay behind, ending her time as one of the Doctor's companions. Supposedly Maureen O'Brien (Vicki) had been growing unhappy with her role on the show which made the program's new producers keen to get rid of her. It sucks that Vicki's departure from the show so closely resembled that of Susan's departure, seeing as Vicki struggled to get out of Susan's shadow from the start. The Myth Makers is one of the show's fairly typical historical stories. Landing the TARDIS outside of the ancient city of Troy, our heroes find themselves mixed up in the war between the Greeks and the Trojans. Vicki and Steven end up in a dungeon, the Doctor convinces the Greeks to build a giant wooden horse, yadda yadda yadda. Vicki's seat in the TARDIS doesn't have a chance to get cold because it is immediately filled by Katarina, a Trojan handmaiden who thinks she has died and that the Doctor is taking her to the great beyond. I'm sure that will all work out.

(Image from Wikipedia)
Posted by Quammy at 9:45 AM No comments:

Mission to the Unknown 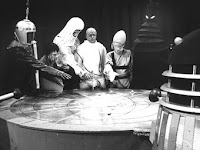 Mission to the Unknown does not feature the Doctor, his companions or the TARDIS. Not even for a second. It's merely a teaser for an upcoming serial featuring the Daleks. Because Doctor Who might have been popular at the time but the Daleks were a phenomenon. The show's staff must have thought they were doing audiences a favor by letting them know that the Daleks would once again be gracing their screens. But it must have been confusing for the audience at the time since the serial that followed this episode did not feature the Daleks. Instead, everyone's favorite Nazi Pepper Pots wouldn't return for another month. Some have suggested that this episode was never broadcast outside of the UK, which would mean that it is extremely unlikely that any copies of this episode still exist and/or will be re-discovered in the future.

(Image from Wikipedia)
Posted by Quammy at 11:23 AM No comments: