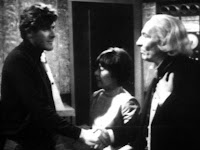 In the final moments of each serial, we're typically treated to a brief teaser for the following story. At the end of The Gunfighters we see a man dressed in animal pelts emerging from the underbrush carrying a large club in a menacing fashion. This didn't leave me with much hope for The Savages. I thought it would probably be a serial along the lines of An Unearthly Child, where the Doctor and his companions find themselves mixed up in the power struggles of a barbaric society. Thankfully, this wasn't the case. The Savages is about a technologically advanced race who are literally draining the life force out of another race on their planet. The Doctor and his companions quickly suss out that something is wrong. It doesn't hurt that the advanced race raise a lot of red flags. Saying shit like: "You're totally free here. Just don't ask too many questions and don't go into that room over there. It's forbidden." And whenever the Doctor asks about the secret of their longevity, they can't wait to change the subject. "What's your secret?" "Hey, don't worry about it." In the end, the Doctor and his friends clean house and Steven decides to stay behind to help broker the peace between the two races.

(Image from doctorwhomindrobber.com)
Posted by Quammy at 6:03 PM No comments: