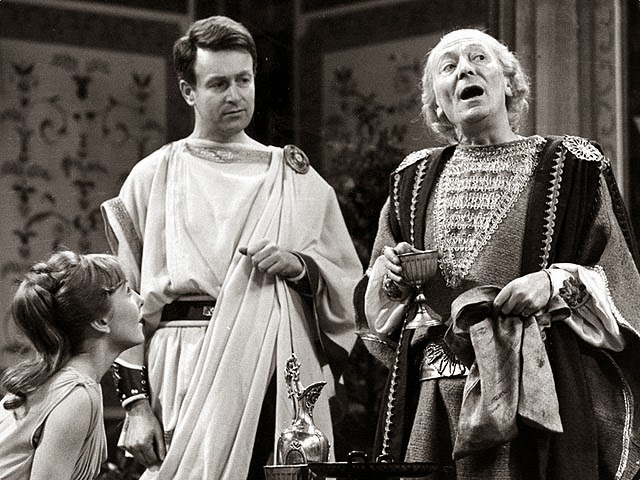 It's 64 AD in Rome and the Doctor couldn't be happier. It might actually be the first time we see the Doctor in a really good mood. We also get to see the Doctor in a fight at one point, his first real physical altercation in the series. And not only does he kick the guy's ass, afterwards he gloats that since he's so used to outwitting his opponents he forgets how much he enjoys "the gentle art of fisticuffs." The Doctor also seems very much in his element when he inserts himself into a conspiracy by assuming the identity of a murdered musician. In hardly any time at all, he gets up close and personal with Nero. Things don't go so well for Ian and Barbara though. Ian gets beat up, he becomes a galley slave, he gets shipwrecked, he gets captured, he almost gets thrown to the lions, and then he's forced to fight a friend to the death. Barbara has a rough go of it too, but even though people are trying to kill her it's mostly just her running away from a horny Nero Pepé Le Pew style. Throughout their ordeals, Ian and Barbara remain pretty calm and focused on escaping their captors, which they eventually do. But while all that is going on, the Doctor is living it up in Nero's court. He plays tricks on everyone as he pieces together the murder mystery that landed him in Nero's lap. He even ends up inspiring Nero to start the Great Fire of Rome. And then, as the city burns in the background, the Doctor and Vicki slip quietly out of Rome and head back to the TARDIS.

(Image from Wikipedia)
Posted by Quammy at 8:03 PM No comments:

Ok, so I got caught up in studying for my doctoral exams or whatever, but I couldn't just let this rest because if I didn't review it then I watched it in October for nothing. Nothing! Anyway, this movie, the 9th entry in the Hellraiser series, was made to retain copyright, and has just about as much cinematic quality as any legal rider. The lesson that I learned in October so you don't have to is that only the first two Hellraiser movies are worth watching. You're welcome!