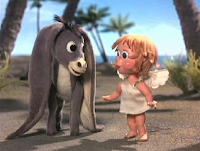 Bravo Rankin/Bass, bravo. I thought I had plumbed the depths of your Christmassy madness, but that was before I saw Nestor, the Long-Eared Christmas Donkey. The Nestor Special takes a few cues from Rankin/Bass's Rudolph Special, wherin our protagonist is an outcast because of his physical abnormalities. After being thrown out of the stable where he grew up and the death of his mother, Nestor meets up with a cherub named Tilly who tells him that he has a greater purpose, one that will bring him to Bethlehem. Along the way he hooks up with Mary and Joseph and uses his long ass ears to help guide them to Bethlehem through a sandstorm, much as Rudolph used his freaky nose to help Santa through all that Christmas fog. The Special is narrated by Roger Miller (who sounds an awful lot like Bruce Campbell) and is somewhat based on a song written by Gene Autry, which makes about as much sense as anything else in this Special. 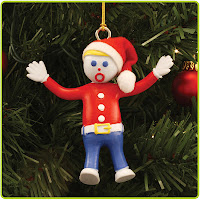 I'm not sure what to say about Mr. Bill's Christmas Special. A third of the Special was filled up with some lame schtick from Father Guido Sarducci (Remember him kids? No? Ask your parents). Another good chunk of the special was filled with a weird retelling of A Christmas Carol featuring some of the worst first generation CGI you have ever seen. There were also a few fake TV commercials thrown in the mix as well. There was actually very little of Mr. Bill in Mr. Bill's Christmas Special, which makes me wonder why the heck they made the dang thing in the first place.

(Image from worldwonders.net)
Posted by Quammy at 5:31 PM No comments: 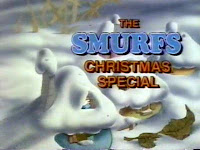 Though Gargamel and Azrael were present, I'm pretty sure the main antagonist of the Smurfs Christmas Special was the devil. Referred to only as "the stranger," the villian was a mysterious cloaked figure capable of powerful magic who tried to transport some kidnapped children via a ring of fire. Once defeated, the stranger simply disappeared. That's some heavy shit for a cartoon about little blue people.

(Image from humordistrict.com)
Posted by Quammy at 12:28 PM No comments: 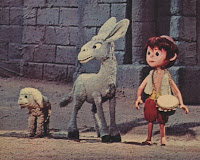 The Little Drummer Boy is pretty typical of Rankin/Bass's Christmas Specials, it takes a well known Christmas type figure and tells an origin story of sorts. The Little Drummer Boy is probably also one of the more straightforward Rankin/Bass Specials, since it doesn't feature warlocks, abominable snow men or anthropomorphic depictions of weather. The Special is kind of a sidequel to the Gift of the Magi, as the little drummer boy crosses paths with the three wise men and eventually follows them to Bethlehem. Aaron, the little drummer boy, spends most of the Special pissed off, he's sworn to hate all people after his parents were killed by desert bandits. By the end of the special Aaron makes it to Bethlehem, is reunited with his dancing animals and swears off hatred after playing his drum for the newborn Jesus.

(Image from christmas-specials.wikia.com)
Posted by Quammy at 12:59 PM No comments: 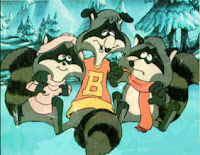 This one is probably a bit obscure for any of my non-Canadian brethren out there. The Raccoons was a cartoon series that ran from 1985 to 1991 on the CBC. The series was preceeded by a number of television specials, the first being The Christmas Raccoons. The show and the Special had a bit of an evironmentalist agenda, every week the Raccoons faced off against Cyril Sneer, an aardvark industrialist bent on maximizing profits whilst destroying the Evergreen Forest. Since the Christmas Special was the first ever adventure for the Raccoons it mostly just introduces the main cast of characters. The Raccoons bump heads with Sneer for the first time after the aardvark cuts down their home for lumber. And when I say they bumped heads, it's pretty much what actually happened. The Raccoons are only able to stop Sneer from clear cutting the forest after they beat him up. And who says all Canadians are friendly? 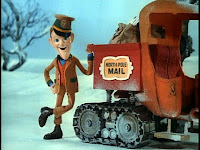 Ah Rankin-Bass, you can always be counted on to bring me some yuletide absurdity. I probably hadn't sat through 1970's Santa Claus is Comin' to Town is some 20+ years, so it was nice to essentially see it again for the first time. The Special (which includes voice work from Mickey Rooney, Fred Astaire and Keenan Wynn) tells the story of how Kris Kringle came to be Santa Claus and how many Christmas traditions got their start. You see, Santa began as an abandoned orphan, raised by toy making elves, who really wanted to bring toys to the children of a vaguely Germanic village called Sombertown. The town was under the thumb of Burgermeister Meisterburger who outlawed toys and made Santa and his associates outlaws. Herr Meisterburger even went so far as to burn a pile of toys in the middle of the town square in front of the children as a warning. In the end, Santa and his friends (which include a warlock and a penguin) succeed, mostly by outliving the Burgermeister, and Christmas is saved.

(Image from theotherjournal.com)
Posted by Quammy at 4:38 PM No comments: 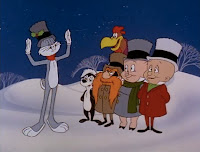 Bugs Bunny's Looney Christmas Tales probably isn't on too many "Must See Christmas Specials" lists, but the Special deserves at least some credit for the amount of material that they're able to cram into 23 minutes. The Special is a compilation of three original cartoon shorts with a bit of a wrap around story to tie them all together. The first short is the obligatory adaptation of A Christmas Carol, featuring Yosemite Sam as Scrooge and Bugs Bunny filling in for the spiritual motivators. The second short is a Road Runner cartoon that has virtually no connection to the holidays. The last short finds the Tazmanian Devil accidentally assuming the role of Santa Claus and bumping heads with Bugs. There's nothing terribly special about the Special but I appreciated it for it's lack of somber themes.

(Image from jeffco.ca)
Posted by Quammy at 6:00 PM No comments:

I managed to get in my annual viewing of my favorite Christmas Special with some friends last night, that special being A Muppet Family Christmas of course, so I thought I'd follow it up with some more of Jim Henson's Christmassy goodness. I'd heard of Emmet Otter's Jug-Band Christmas before, but I'm not sure if I'd ever actually seen it. The special tells the story of Emmet Otter and his widowed mother, two down on their luck otters trying to make ends meet. A local talent contest promising big time prize money offers them a chance to finally have a proper Christmas, but in order to enter they'll have to put their last few meager possessions in hock. They'll also have to compete with the likes of the Riverbottom Nightmare Band, a rock group made up of degenerates who sound an awful lot like Deep Purple. I was convinced that the special was going to be a serious downer, but it thankfully steers clear of cliche endings and overly maudlin moments.

(Image from muppetcentral.com)
Posted by Quammy at 12:16 PM No comments:

Most Christmas Specials do little more than insert their sitcom/cartoon characters into variations on A Christmas Carol. The Fat Albert Christmas Special does that too, but it also mixes in a little bit from the Christmas pageant. The Special starts out with Fat Albert and the gang rehearsing a Nativity play when they're interrupted by Mr. Tyrone, the heartless owner of the junkyard where the gang have made their clubhouse. Mr. Tyrone threatens to bulldoze the clubhouse because he's a jerk and that's what jerks do around the holiday season. After he leaves, the gang are interrupted by a family in distress. Their car has broken down, they've got nowhere to stay and the mother is due to give birth any minute (sound familiar?). From there it's a madcap dash to save the clubhouse and help the struggling family. The special is short, entertaining and has a visual stlye that depicts urban environments in a stylized yet somewhat realistic manner that marks it as being very much from the 1970s.

Posted by Quammy at 2:03 PM No comments:

12 More Days of Christmas Specials: It's a SpongeBob Christmas!

I've only ever seen a handful of SpongeBob SquarePants episodes before but, as far as I can tell, the stop motion animation special It's a SpongeBob Christmas! only differs from a normal SpongeBob episode in that everything is made of felt and clay rather than being traditionally animated. The plot of the Special finds Bikini Bottom's resident evil genius, Plankton, plotting to get everyone put on the naughty list by feeding them fruitcakes contaminated with jerktonium, thus turning them all into jerks. SpongeBob himself is immune to jerktonium due to his innocent heart and overwhelming capacity for Christmas Spirit. I have to give the makers of the Special props for having John Goodman do the voice of Santa (because everything is better with a little Goodman in it) as well as climaxing the special with a song called "Don't Be a Jerk (It's Christmas)." All in all, it's a bit more absurd and manic than what I usually look for in a Christmas Special, but it's still miles away from some of the treacly, depressing crap I've sat through in the past.

(Image from strangekidsclub.com)
Posted by Quammy at 1:01 PM No comments: 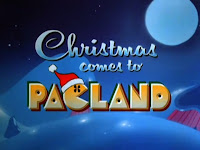 I wasn’t surprised to find out that there was a cartoon series based on Pac-Man but I was surprised to learn that it somehow lasted for two seasons and had its own prime time Christmas Special. It couldn’t have been easy for the people at Hanna-Barbera to adapt Pac-Man into a Saturday morning cartoon series. It’s not like the original video game contained an abundance of backstory or character development. But they forged ahead and made a show out of the property anyway and, 30 years later, I watched their Christmas Special. The plot of the Special is pretty standard for a cartoon that doesn’t feature humans and doesn’t exactly take place in our world. An unfortunate mishap leaves Santa stranded in Pac-Land on Christmas Eve and it’s up to Pac-Man and his friends to save Christmas. I don’t recommend watching the Special unless you are overly fond of the words “Pac” and “chomp,” as they featured in every other line of dialogue.


(Image from christmas-specials.wikia.com)
Posted by Quammy at 7:26 AM No comments: 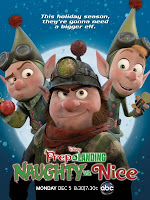 I wanted to kick off the holidays on a positive note this year, which is why I decided to lead off my annual Christmas Special binge with Prep & Landing: Naughty vs. Nice. I really enjoyed watching the original Prep & Landing special last year and I can happily say that the sequel does not disappoint. Everybody’s favourite elves Lanny and Wayne are joined by Noel, Wayne’s charismatic younger brother (voiced by Rob Riggle).The trio are on a mission from Santa to recover some North Pole technology stolen by a young hacker known only as jinglesmell1337 (yes, you are old and internet lingo has become the domain of children). Will be able to put aside his emotional issues (again) and effectively lead his team, thus saving Christmas? Spoiler alert: yes, he will.

(Image from movieposterdb.com)
Posted by Quammy at 6:22 AM No comments: