The Lemon Ice King of Corona

It’s summertime, bitches! Or at least it feels like it after nine and a half years of winter. If you’re in NY and only going to like fancy ramen place in Brooklyn, wise up and get your ass to Corona. The Lemon Ice King, founded in 19-fucking-44, has 50 flavors of ices that are all so delicious that maybe you’ll forgive them for not mixing and get two for yourself. Pistachio has actual pistachio nuts in it, not that slivered almond Breyer’s shit. Peanut butter has peanut butter chips. Grape has an actual fatass grape. In the heart of summer there will be long lines and your butt will sweat and you never get enough napkins but it is all worth it. 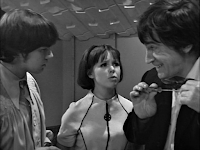 I wasn't looking forward to watching The Space Pirates. Despite knowing that it would be the last time I would have to sit through some grey market episode reconstructions, which I have done many times already, I was dreading getting started on this serial. Now, having seen it, I'd have to say that my fears were warranted. The Space Pirates isn't a particularly good serial, even if it did stray from the typical "base under siege" story format. I had issues with the costumes, the production designs and the acting, especially after just having seen The Seeds of Death. But perhaps the biggest factor working against The Space Pirates is how inconsequential it makes the Doctor and his companions. The story seems to unfold all around our heroes without them ever playing much of an active role. Other than an escape plan that the Doctor hatches using some marbles, candle wax and a pile of flaming rags, the bulk of the story just kind of pushes him along from A to B.

Rating: Zoe, don't be such a pessimist%
Posted by Quammy at 3:32 PM No comments: