The Wheel in Space 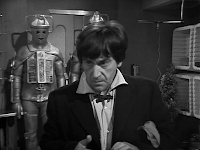 So far, all of the Cybermen stories have been consistent with the Second Doctor era's reliance on the base-under-siege storytelling formula. You could even argue that The Tenth Planet and The Moonbase were practically the same story. And yet, The Wheel in Space was the first Cybermen story that I didn't thoroughly enjoy. For me, it was just too much like The Ice Warriors, a serial that was a Cybermen story in all but name. There wasn't anything in The Wheel in Space that seemed particularly unique, as if all of its pieces could have been taken from other serials. The only real takeaway from this story was the introduction of the newest companion, Zoe, a brilliant young astrophysicist. Already, her relationship with the Doctor and Jamie is much different than the one they had with Victoria. Zoe appears to challenge and exasperate the Doctor and Jamie, where their relationship with Victoria had been much more paternal and doting.

Rating: Logic, my dear Zoe, merely enables one to be wrong with authority%
Posted by Quammy at 6:30 PM No comments: