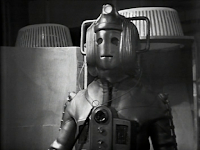 By the time The Invasion was conceived, it was already apparent that things needed to change for Doctor Who. Ratings were down and the show was still struggling with a variety of problems behind the scenes. Patrick Troughton had grown tired of the show's grueling production schedule and it had been announced that season six would be his last season as the Doctor. The Invasion was an attempt to establish a new format for Doctor Who. For starters, the serial introduced Brigadier Lethbridge-Stewart's UNIT military organization. The Brigadier had previously been seen in The Web of Fear when he was still a Colonel. Now, having "moved up in the world," the Brigadier was the leader of a fancy, high-tech military group tasked with investigating and engaging paranormal and/or extra-terrestrial threats. The show's aim was to provide the Doctor with an Earth-based support system. And having the show film on location in contemporary settings helped stretch its already meager budget. Had The Invasion been a failure, the producers would have probably tried another strategy. Instead, because of the higher audience feedback scores, The Invasion became the template for the Third Doctor's era. Beyond that, the serial is also notable for the iconic image of the Cybermen marching in front of St. Paul's Cathedral and possibly my favorite of the Cybermen's many designs.

Rating: Brigadier, you don't, by any chance, know where I can find a canoe?%
Posted by Quammy at 5:03 PM No comments: