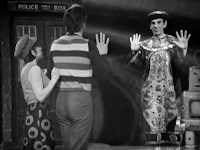 At this point in the series, Doctor Who was desperately looking for a way to get rid of Doctor Who. William Hartnell, the First Doctor, struggled with his lines throughout his entire tenure as the Doctor. And by 1966, he was also butting heads with the show's production staff. The Celestial Toymaker was initially written as a way of getting rid of Hartnell. During the serial the Doctor is rendered mute and almost entirely invisible, the plan was for the Doctor to change form when he was made visible again. Instead, behind the scenes, Hartnell's contract was extended for another five serials. He probably didn't know it at the time, but those would end up being his last five serials as the show's lead.

Rating: This is some form of attack%
Posted by Quammy at 1:08 PM No comments: 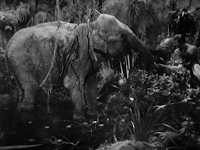 I'm glad that copies of The Ark still exist. It's an ambitious, albeit goofy, serial. It's probably most famous for the Monoids, a race of one eyed aliens that look like one of Dr. Seuss' rejected character designs. The serial has some decent special effects for the era and a fantastic cliffhanger at the end of the second episode. But it also has multiple instances of characters trying to deliver the words "security kitchen" with ominous conviction. And it cannot be overstated how ridiculous the Monoids are, from their bizarre appearance to their maniacal lust for power. I would recommend The Ark for anyone wanting to see an example of high-reaching sci-fi on a budget.

Rating: I couldn't send you home even if I wanted to%

P.S. If you click on the picture in this review, you'll see the Doctor, Steven and Dodo casually petting an elephant. I chose this image over a picture of the Monoids simply because I couldn't believe there was a moment in the Doctor Who canon where the Doctor got to walk up to and interact with a live elephant.
Posted by Quammy at 1:55 PM No comments: